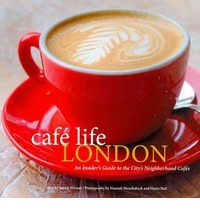 This attractive book compiles together a few dozen of London's most appealing cafes. It opens with a chunky section on the recent influx of superior coffee shops. Other sections examine cafés specialising in tea, cafés inside shops, neighbourhood gems, and the local greasy spoon. This final, slim chapter aside, nearly all the establishments here were set up post-2005, when a backlash against the still-burgeoning chain outlets prompted a wave of independent openings, spearheaded by the "third wave" of coffee establishments typified by the flat white-wielding antipodean barista. Rather than attempting a comprehensive account, the author picks a few of her favourites and explores them in depth, talking to the owners and baristas and sharing their stories. These tend towards the repetitive if you attempt to read it cover to cover (especially the coffee section), but as a dip-in guide to the best beverages in town and the care that goes into them, this is a well-brewed serving with little froth.

Café Life London by Jennie Milsom is out now from The Armchair Traveller. Buy on Amazon or direct from publisher. 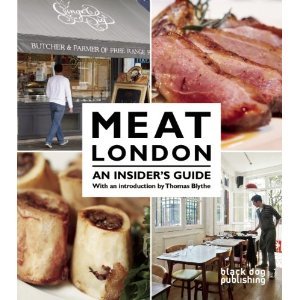 Despite sounding like a typo for a bad dating website, Meat London offers a well-researched guide to the best meat restaurants, butchers and street food specialists in London. This isn't a book for the casual carnist. Dishes such as "spleen and lung simmered in lard and served with focaccia bread" (Bocca Di Lupo, Archer Street) are the norm. Typical prices are rarely given, which might irritate some, but reflects the target audience of meat connoisseurs prepared to pay a premium for a delicious cut. The street food section is perhaps more widely accessible and highlights the stories behind a few well-known vendors such as Kimchi Cult and Daddy Donkey. The final section on quality butchers is a nice touch with some good personal stories.

Meat London by Tom Howells is out now from Black Dog Publishing. But from Amazon or direct from publisher.