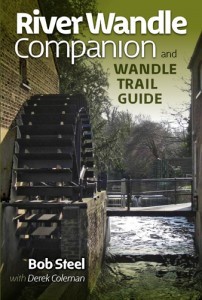 The River Wandle rises somewhere near Croydon and meanders down through Mitcham, Merton and Earlsfield before emptying into the Thames at Wandsworth. It's surely south London's most well-known river, and packs in a long history of industry and recreation.

This new guide by Bob Steel, with contributions from Derek Coleman, covers the river's past, present and future in extraordinary depth. It's split in twain: the first half covering the history, wildlife and restoration of the river; the second providing walking guides and maps.

The Wandle has quite a history. The Domesday Book of 1086 records 13 mills in operation, rising to a possible 90 during the Industrial Revolution. The river's power was harnessed to make everything from snuff to paper, while its waters were co-opted by the brewing and dyeing industries. Most famously, William Morris and Arthur Liberty (he of the shop) set up a fabric printing works along the river's banks. The Huguenot hat makers of the lower Wandle were so skilled, they enjoyed regular orders from the Cardinals of Rome.

All this industry took its toll. Photographs in the book show the foamy, effluent-heavy Wandle of the 1950s. A decade later, the river was officially declared a sewer. Since that time, successive conservation efforts have restored the Wandle to a decent, if still imperfect, state. Wildlife has returned, as the ever-present anglers are testament. Children once again swim in the Wandle as it passes through Morden Hall Park.

The walking section is packed with detail. Well over 100 pages guide you from Croydon to the Thames. You're advised to take it slowly, look out for the many signs of industrial heritage, and refer to the old maps — a nice touch that lets you see at a glance how the watercourse has changed. Occasionally, we found that directional clarity was sacrificed to pack in more history, but it's no great crisis to lose your way momentarily.

Bob Steel, a geographer and life-long resident of the Wandle's banks, wraps all this together with enthusiasm and a local's eye, while co-author Derek Coleman brings considerable knowledge of natural habitats to the table. Decorated with 200 photographs and images, and over 40 maps, this is an authoritative and attractive  guide to one of London's natural treasures.