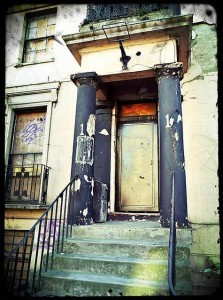 Newham council is taking on the borough's bad landlords with tighter legislation and a new licencing scheme.

The council aims to be the first borough authority to require private landlords to be licensed. From January 2013 all landlords in the borough will have to pay £150 every five years. Failure to licence properties or breach conditions could mean fines of up to £20,000.

A BBC report highlights some of the appalling conditions which tenants are being forced to live in and names one of the landlords responsible. But the fact that the landlord has multiple convictions for failing to maintain his properties safely even under current laws suggests a questionable level of compliance with any future legislation.

It's not as though the problem of bad landlords and slum housing is anything new, but public (and media) attention is increasingly focused on housing issues. The spiralling cost and demand for rental properties in a prohibitively expensive housing market has taken letting out of the reach of many. Newham is also no stranger to the housing issues created by a rising rental market versus falling benefits — in April the authority was accused of social cleansing after moving some of the poorest tenants out of the borough.

So are Newham's licencing plans A Good Thing? Not everyone thinks so. A letting agency director writing for the Guardian points out that the legislation to bring bad landlords to heel is already there, councils just need to enforce it better. A housing officer, again writing in the Guardian, also doesn't support the licencing plan but moots better use of the existing legal framework to prosecute rogue landlords.

There's also the very valid question of whether Newham council has the resources to inspect the 35,000 rented homes in the borough.

It's tempting to blame landlords for every evil known to man but the majority of landlords are generally not grasping thugs overseeing acres of collapsing rat-infested slums. The ones who are, are unlikely to be deterred by £150 and the potential of a council inspection at some point in the distant future. Taking a fragmented approach towards legislating the rental market is likely to mean that even more bad landlords ignore the law and continue to exploit tenants while responsible landlords with decent properties are tied up in red tape.

Photo by buckaroo kid in the Londonist Flickr pool.