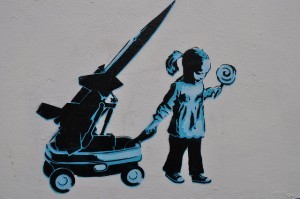 The Ministry of Defence today confirmed that it will place anti-aircraft missiles at six points around the Olympic Park. The sites, which include residential developments, are:

The missiles would be used as a final resort in the unlikely event of a 9/11-style aerial attack on the Park. The warship HMS Ocean will also patrol the Thames.

The plans have met with vocal resistance, especially given that some of the missile sites are in built-up residential areas. Locals are concerned both at the lack of consultation and the possibility of the emplacements themselves becoming terrorist targets. According to the BBC, residents of Fred Wigg Tower have begun legal proceedings against the MoD.

Another concern is that blowing a hijacked jet out of the sky could cause just as many casualties as a successful attack. This could certainly be true. The military might have to choose between letting a jet fly straight into the stadium on live TV, or bringing it down in a way that causes less of a 'spectacular' — but not much less, and with potentially just as much damage and death.

Deployment of air defences might serve another purpose, of course, by acting as a deterrent. But if terrorists know they could be thwarted in the act, they might simply shift to a softer target. And could the missiles even make an attempt more likely? An attack that forces the military to fire on its own citizens is perhaps an even more sinister form of terrorism.

The Ministry of Defence has clearly thought long and hard about this, with the input of numerous counter-terrorism experts, and with intelligence that no newspaper, blog or TV station has access to. We have to have faith they know what they're doing. But questions need to be asked when a sporting event has reached such proportions that it requires military strategists.

Image by Guy Tyler in the Londonist Flickr pool.