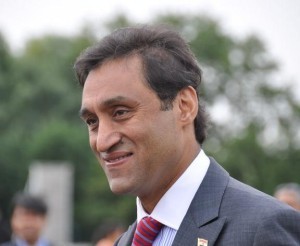 There are five new members of the London Assembly this term so we thought we’d find out a bit more about them. Rounding off our series of interviews is Dr Onkar Sahota, the Labour member for Ealing and Hillingdon who defeated former Deputy Mayor Richard Barnes at the election.

What did you do before becoming an Assembly Member?

I was a full-time GP. I trained as a doctor at Sheffield medical school but have spent most of my life in Hayes and Ealing. I did my post graduate medical training at St Mary's in Paddington and joined my first partnership in 1989 in Hanwell. I became my own boss in 1994 and we now have three sites with 12,000 patients in Ealing.

You quickly realise that hospital doctors have short, sharp interventions with patients whereas as a GP you have the privilege of being with the patient over a long period of time. You become an advocate not only for their health but also their social issues, you hear about their worries over their pension or if they can afford to pay the gas bill or university fees, you realise there's only so much you can do as a doctor. Maybe 40% of their problems are related to problems in society.

So I was a full-time clinician, also working in Ealing Hospital and being involved with the NHS, in PCTs and commissioning groups, making sure we provide the best care. I've always worked in the NHS, never in private practice. I still work as a doctor two days a week because I think it's important to remain in contact with patients and to be available to the people who voted for me.

Why did you stand for the London Assembly?

There's a story from when I tried to become a councillor before I went to medical school. Candidates are selected by members of the Labour party and my father got the names of all the people in charge of the selection. I lost the selection meeting and a few years later found out that my father had rung them all up and said 'don't vote for Onkar because I want him to go to medical school'! My parents came here as part of the economic migration of the 50s and 60s and they realised that if they wanted their son not to end up as a factory worker, the best route was through education.

What made me get involved with politics again now is the changing climate, and my children being older. But also, politics is about being in the right place at the right time. I felt that the NHS and my local hospital were under threat and that I now have the time and capacity to offer something to politics. I think you need to have some life experience to be a good politician, we need a diversity of people in politics who bring real life skills.

How much of your successful campaign was down to people wanting a change and how much on your support for the NHS?

On the doorstep, I heard that people are feeling the pain of the cuts and Tory policies. For people at the lower end of the socio-economic scale, 'we're all in it together' doesn't resonate with them. This was their first chance to hold the Tories and Liberal Democrats to account. The second thing was the Health and Social Care bill. All the Royal Colleges have been running a huge campaign against it over the last 12 months but it seemed that it fell on deaf ears. And a consequence of those reforms has been what's happening in Ealing.

They say that Ealing Hospital is not going to close. But when the Accident and Emergency department of a hospital closes, none of the acute beds in the hospital can survive. The medical beds, maternity beds, general surgery beds, will close also. The A&E department is a system to take patients who are undiagnosed and be processed by experts. If that doesn't exist, the first thing is that the hospital says 'we don't need to have all this machinery' behind the scenes. Second thing is the Royal Colleges say that junior doctors are not getting exposed to acute cases.

Ealing Hospital gets 100,000 A&E attendances a year, of which 20,000 are 'blue light'. Of the other 80,000 that go to A&E, 50% are being referred by GPs. If you remove the A&E department, what happens to those patients? They have to go and be processed somewhere else. The hospital will close down. The building will end up as a posh outpatient clinic, which you might as well rename a polyclinic. So there was that local factor in the campaign, but that wouldn't have stood up in Hillingdon. It was a combination of factors.

What are your areas of political interest?

Of course health is a big issue for me, but also the economy. I have a MBA from London Business School, and one thing I learned there was business ethics. Communities do well and grow when business is done ethically, we need to get London out of recession and focus on growth. Cuts and austerity doesn't always work. I am concerned about housing, which is a big issue for London. In Ealing we have a problem with 'beds in sheds'. We need to regulate landlords and also create responsible tenants. Ken Livingstone had a good idea for a London Lettings Agency, an honest broker. And we need to build social housing.

Also, Heathrow Airport is in my constituency and I'm concerned about it. I recognise that if the UK is to remain a business hub we need to accommodate those traffic flows. Moving it to the estuary is pie in the sky. It won't happen, because of the environment and also the infrastructure. There is room for thinking about whether we make Heathrow the business hub, and move short haul flights to Gatwick and Stansted.

What do you hope to have achieved by the end of four years?

If I have saved Ealing Hospital, or made sure this government is held to account for what it's done to the NHS, I'll have achieved a lot. If I've made the route of HS2 more acceptable to my residents I think I'll have achieved a lot. And played my part in holding this Tory Mayor to account, because let's not forget that when he was elected, Boris Johnson said he would be the template for a Tory government.

How much influence over the NHS do you have as an Assembly Member?

It's about raising the profile of the case. When I raised Ealing Hospital at Mayor's Question Time it got a lot of press. The Mayor has said he's happy to meet me to be persuaded of the case, and if I can persuade him then he will be a very powerful ally. I can also bring people together in a cross-party approach. After all, the Mayor's right that the NHS isn't an Assembly matter, but neither was campaigning for getting rid of the 50p tax rate.

What’s your favourite bit of London?

I love West London, where I live, in Ealing. There are some lovely parks, like Osterley Park and Ealing Common. And now I'm discovering more of the area around City Hall, it's full of beautiful cafes and the richness of the South Bank.