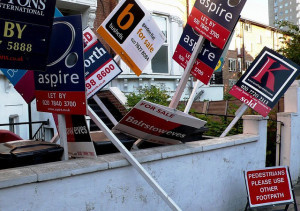 When we talk about housing, we're talking about something that affects us all. London is in the grip of a perennial housing crisis. The GLA estimates the city needs at least 32,600 additional homes each year to keep pace with the increasing population, that 250,000 households are overcrowded, 35,000 households are in temporary accommodation and a third of homes in London don't meet the Decent Homes standard (this includes private rented as well as social housing). Renters experience landlords who don't fix problems, letting agents who charge high fees and don't return deposits as well as lack of security on tenancies. Rents are climbing, house prices are the highest in the country and good mortgage deals are still not easy to find.

Even before the candidates' manifestos are published, both Jenny Jones and Ken Livingstone are pushing for stronger protection for private tenants. In her capacity as Assembly Member, Jenny Jones is on the Planning & Housing Committee and has been looking at the Mayor's Housing Strategy (PDF). She's published her own thoughts on the private rented sector, which include her assessment that both tenants and landlords want and would benefit from reform and regulation.

Ken Livingstone sets out a similar stall. If elected, he says he would establish a London-wide non-profit lettings agency to improve standards and matchmake good landlords with good tenants, offering more security (and so reducing costs associated with frequent moves). His most eyecatching policy is the London Living Rent. The Mayor has no power over market rents but, as with the London Living Wage, the idea is that City Hall would lobby for affordable rents – defined by his campaign as no more than a third of income.