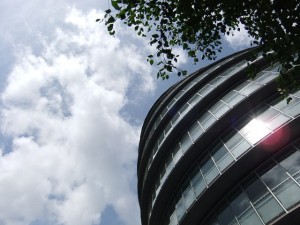 Boris Johnson faced some tough questions on some tough topics at yesterday's Mayor's Question Time and, in contrast to previous sessions, managed to remain jocular throughout. No red faced shouting in evidence, though he occasionally got a little tetchy (after all, this is Boris). He even came into the chamber whistling. Whatever could have caused the Mayor's good mood?

First up, Assembly Members (AMs) wanted to know about Barclays. Primarily, are they still a fit and proper sponsor for the Cycle Hire? The Mayor stuck to the line he's held since the Libor-fixing scandal broke: Barclays has saved the taxpayer £50m and we shouldn't demonise an entire company, with tens of thousands of decent employees, just because of a few bad apples:

Now, even apart from the fact that £50m is the maximum Barclays will pay to 2018 (payments are based on performance criteria, which the bikes aren't meeting, so payments are likely to be below £50m), Boris seems to be forgetting how reputational damage works. When a few employees at accountants Arthur Andersen shredded incriminating Enron documents, it brought down the whole company even though the vast majority had done nothing wrong. Boris thinks the general public doesn't care that much about Barclays. Well, we're the general public – leave a comment to tell us if you think the fabulous bike hire scheme is tainted by association.

Then came the Met police. Boris thanked former Mayor's Office for Policing and Crime chief executive Catherine Crawford and her deputy, Jane Harwood, for their service following their abrupt departure earlier this week. The AMs wanted to know just how on earth Stephen Greenhalgh, the Mayor's policing deputy, thought he could maintain an effective overview of the police when he's still laughably not up to speed with the job. Who would fill the knowledge gap, they demanded. The answer seems to be that the Commissioner, Bernard Hogan-Howe, is in charge and Boris is happy for him to carry on without effective oversight for the time being as "policing is in good shape". Which made us wonder: if Hogan-Howe is fine on his own during the major challenge of the Olympics, does Boris think there's ever a need for a policing scrutiny and advisory body?

One area the MOPC (or MOPAC as it's increasingly called, for no other reason than we think Greenhalgh doesn't like it being referred to as 'mopsy') admits it needs help with is administration. Even though Crawford and Harwood have left, there's still work to be done. The Mayor's Chief of Staff asked the Assembly to see if they'd allow the Head of Paid Service to take on extra responsibilities. The non-Tory Assembly Members told him to take a hike.

This is all pointing to a total mess at the heart of MOPAC, with very little planning around these two very significant job losses. Joanne McCartney asked what Boris had to say about the whole sorry affair, even quoting Deputy Mayor Victoria Borwick's criticisms of Greenhalgh. Boris answered Joanne while staring at Victoria, saying something about how his deputies tend not to last very long...

AMs also had some stinging points to make about World Pride (we wrote about the event's troubles earlier today). Boris said City Hall are putting £100k towards it but that he hadn't been aware of problems until very recently.

So, what else? Boris got into his usual tussle with Val Shawcross and Jenny Jones over the numbers of cyclists and pedestrians killed on London's roads. The Mayor focuses on killed and seriously injured people on TfL roads going down, AMs press him to acknowledge the rise in slight injuries across the whole capital. This has been going on for months and Boris does not like it one little bit, calling the firm-but-pleasant Val "aggressive".

Other useful bits and pieces: funding to make the Freedom Pass available to the over 60's will come from TfL, not councils; the Olympic Route Network is "flexible" and will be opened up using electronic messaging boards if roads are gridlocked; all eight prototype New Buses for London will be on the roads by the Olympics; and Boris definitely did not say a single word about Operation Weeting to Rebekah Brooks or Rupert Murdoch when he met them for dinner – in fact, rather than getting angry at Len Duvall's questions, he seemed rather bemused.