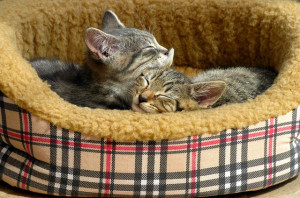 Well, that was a waste of three hours of everybody's time. The final Mayor's Question Time before the election was unenlightening, miserable and thoroughly bad tempered. So bad tempered, in fact, we felt the need to provide a picture of kittens to get you through the litany of insults and whinging you're about to read.

We're not going to cover what was asked: questions were designed to allow Boris to air snatches of his stump speech or framed to allow opponents to attack his record; most were answered with reference to Labour policies past, present and future and contained nothing new. Instead, here's what went on in the Chamber.

It started off badly: it's fairly obvious that Boris can't stand Val Shawcross (Lab). He talks across her when she asks questions, wasting her allocated timeslot so she usually can't ask as much as she wants, sighs deeply as he listens and throws pejoratives at and about her. Today he chuntered not-so-under his breath as she read off statistics from TfL, interjected with "cobblers", called a direct quote from the Moody's report "nonsense" and got a gasp from the room at his pronouncement that she had a "dismal ignorance of the figures".

Val was also slapped down by Chair Jennette Arnold (Lab) for bringing a non-Assembly produced "prop" into MQT (it was a TfL report), yet Conservative members and the Mayor waved his new Progress Report at every opportunity. Jennette allowed this electioneering for a considerable time until losing patience and telling Boris nobody is allowed to bring 'outside' documents into the Chamber. The Mayor professed ignorance at this particular rule, at which point an exasperated Chair asked "who is advising you?".

Tory group leader James Cleverly expressed concern at potentially coming across as a sycophant, to which Boris assured him that "being a sycophant is no crime here". Later, he quipped to Andrew Boff (Con) that being a sycophant "is no disgrace" in a politician to which Andrew, to his credit, replied "it is a disgrace".

Dee Doocey (LD) brought up targets for employing local people in the Olympics, a point she says she's raised often with the Mayor. Boris said that if she attended more sessions he might remember her questions better, which shocked the Baroness (we checked her attendance; she's missed just two Mayor's Question Times during Boris's tenure). This sparked a general exchange in which Boris was accused of being dismissive towards women – James Cleverly leaped to Boris's defence, highlighting earlier negative comments about Navin Shah (Lab) as evidence of his equal opportunity insults. We clearly heard Jennette Arnold ask James "and you think that's good?".

That particular incident is going to earn Boris an official complaint; Dee was clearly going to let it slide as just one more incident in a foul morning, but James Cleverly took a not unreasonable exception to Nicky Gavron (Lab) suggesting TfL was doing a "secret deal" over the Earls Court Opportunity Area. Demanding to know why the Chair had not censured Nicky, Jennette explained that she was doing her best to keep the meeting fluid. James said he would raise a complaint, so now Dee's going to follow suit.

Photo of lovely, calming kittens by S Clark from the Londonist Flickr pool. If you really want to watch it, the webcast is available. Read more of Londonist's actual election coverage.