Book Review: The Wit And Wisdom Of London

By M@ Last edited 96 months ago
M@ Book Review: The Wit And Wisdom Of London 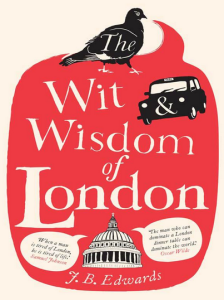 The Wit and Wisdom of London from JB Edwards collects together hundreds of quotes from authors, poets, politicians, artists and the occasional fictional wizard. At around 200 pages, there's plenty of wit, plenty of wisdom, and also a quote from Jeffrey Archer.

As well as the predictable stalwarts (Johnson's trite 'tired of London' quote is the first on the front cover), Edwards also weaves in a few more recent bons mots. Alan Partridge's contemptuous comment that visitors will "either be mugged or not appreciated," adds some light relief from the weighty Victorian observations and the continuous bitching of Nathaniel Hawthorne. Ditto the remark by Albus Dumbledore, who had a scar shaped like the Tube map. Ken Livingstone's address following the 2005 transport bombings, meanwhile, is both moving and poignant when placed in the context of other important speeches from London's history.

At the end of the day, this is simply a compendium of fine words about the capital. It's not the first book on our shelf with this goal, and probably won't be the last. A diverting gift book for anyone who loves the capital, or wants some eloquent ammo for either dissing or praising our city.

The Wit and Wisdom of London by JB Edwards is out now from Virgin Books. Buy here.