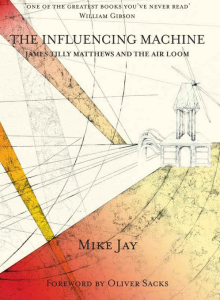 James Tilly Matthews was confined to Bedlam in 1797. The "incurable lunatic" was locked away after entering the House of Commons and crying 'Treason!' at Lord Liverpool. His back-story and subsequent endeavours make for one of the most spellbinding tales in the annals of psychoses, which Mike Jay brings to life with flair in this updated version of his 2003 classic.

Matthews, a self-appointed diplomat, witness to the French Revolution, amateur architect and would-be cabbage magnate, also had a complex delusion: that a gang of mind controllers were secretly directing the great men of Europe. These psychic puppet-masters employed a mechanical contraption known as an "air loom", which Matthews was able to sketch out in almost scientific detail. It was powered by the most noisome admixture imaginable: "seminal fluid, male and female...effluvia of dogs — stinking human breath... stench of the cesspool — gaz from the anus of a horse". He also describes the gang members, their appearance, interactions, foibles and virtues, as though he knew them personally.

While the fabulous air loom and its demented magic form the chief hook, Jay's account also straddles wider themes. The early chapters concerning the French Revolution are as readable an account of that momentous time as you'll find anywhere. He also captures the conditions in Bedlam during a period when the old foundation-less building near Liverpool Street was sinking into the ground. A new hospital was needed, and the incarcerated Matthews was among those who submitted plans.

Jay — co-curator of Wellcome Collection's recent High Society exhibition, and co-author of Medical London — is at his most powerful when tackling the human condition. The powerplay between patient and doctor, the changing attitudes towards those who are declared insane, and Matthews' particular and peculiar case, deemed to be the first diagnosable account of schizophrenia on record, are all illuminating.

This fresh edition of The Influencing Machine includes a reworked text by the author and new images, including Matthews' own designs for New Bedlam. We highly recommend you buy a copy, and we're pretty sure no unseen forces are prejudicing that opinion.

The Influencing Machine by Mike Jay is out now from Strange Attractor Press. Buy here from Amazon or here direct from the publisher.