Book Review: Over The Border, The Other East End

By M@ Last edited 122 months ago
M@ Book Review: Over The Border, The Other East End 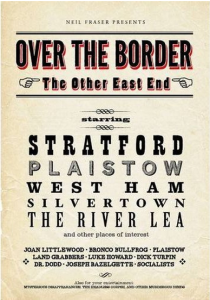 Neil Fraser's first book reaches the parts of the East End other writers don't bother to reach. Tales of the Krays, Ripper and Elephant Man are little more than footnotes in a chunky guide to London east of the River Lea.

Part personal travelogue, part folk history, Over the Border's focus is mostly on the modern borough of Newham, which includes the more ancient realms of Stratford, Plaistow, West Ham and Silvertown. The book flits around the borough with no obvious geographical direction or chronology, but packs in some lesser-known tales from the area's past, such as the Plaistow land-grabbers (a kind of early 20th Century Occupy movement), and Joan Littlewood's efforts to bring serious theatre to working-class Stratford.

The Olympics loom large during the first-person sections, which hum the familiar lament for the losses that come with regeneration. The overall sense is one of change, with the modern transmogrifications just the latest in a couple of centuries of structured turmoil.

"Change, and the idea of change, has been continual for a long time in this restless land by the Lea. The change just flows at different speeds, and at the moment it is flowing dramatically fast."

The more historical sections are rich in quotations and research, an impressive achievement considering Newham Archives were closed for much of the time the author was writing the book. This being a first effort from both publisher and author, a few haphazard errors creep in (apparently, Stratford's going to get a 133 storey tower!). But this shouldn't deter you from a hugely enjoyable account of a this diverse and historic part of town.

Over the Border, the Other East End is available now from Function Books. Buy here.