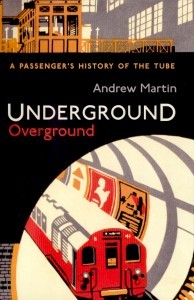 Can London's swollen book shelves bear another history of the Tube? Andrew Martin certainly thinks so. His new book, Underground Overground, charts the development of the network we love to hate, from its Victorian origins to the modern day.

In doing so, he's treading ground that's been explored many times before. Christian Wolmar's The Subterranean Railway (2005) was the most recent overview, and is cited many times in Martin's book. A quick search on Amazon turns up dozens of other publications that cover the Underground from every niche and angle.

So how does Martin differentiate himself? First, he has good chops for the job. You might recall his Tube Talk column in the Evening Standard, which explored the network's more idiosyncratic side. He's also penned eight historical thrillers set on the railways. Consequently, Underground Overground is an effortlessly readable account, with plenty of fresh trivia and cultural references.

Alongside the towering historical personalities (Pearson, Yerkes, Holden, Green, Pick et al.), the author celebrates some of the more recent Tube heroes. Epic walker Mark Mason; former world record-holders for visiting every station Geoff Marshall and Neil Blake; and Ajit Chambers, the man who wants to reopen London's ghost stations, all get their dues. He also asks those difficult questions: Why do they build platforms with gaps in the first place? How do the trains get into the Waterloo & City Line when it's not joined to other lines? What would happen if you pissed on a live rail?

At first we cringed to see the same old stories, yet Martin successfully reanimates dead material. The fake houses in Leinster Gardens are a good example. Many readers will be familiar with these facades, which disguise an unsightly rail cutting. They've kept trivia compilers in pocket for decades. Rather than simply repeating the story, Martin goes to interview the hoteliers either side of the facade (one was totally unaware of its existence). Likewise, if TfL's lost property office in Baker Street and Harry Beck's original Tube map have both been chronicled ad nausea, Martin's lively account is an anti-emetic.

To answer our opening question: yes, when the content is this good, there is space on our book shelves for another history of the Tube. Underground Overground offers a fresh take on a much-told story, which woud entertain and enlighten the most well-read Tube geek. Even Will Self likes it, which is surely an achievement.

Underground Overground is out now from Profile Books. Buy it here.