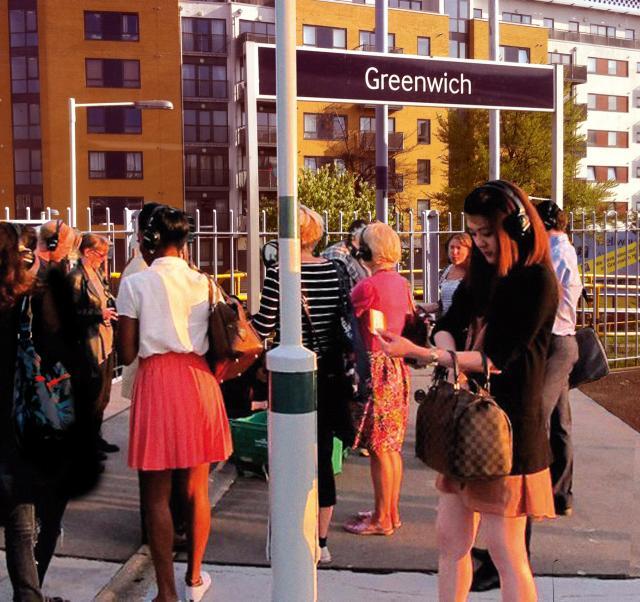 If you travel on the train between Charing Cross and Greenwich you might have spent a couple of days puzzling over the brightly coloured signs that have appeared within view of the tracks. Is it a lo-fi marketing campaign for a new Ricky Martin single? Or what about that early Halloween installation at Deptford? And at Waterloo East... no, we're not going to spoiler you for what's at Waterloo East.

It's actually all set dressing for Mean Between Times, an audio performance from theatre company 11:18 as part of the Greenwich and Docklands International Festival. Setting off from Charing Cross station* you're handed a pair of headphones and led onto a train – not a special train, or a set-aside carriage, but the normal train peddling the commuter route. You hear the stories of various Londoners, and make sure you're looking out the windows to spot the various, carefully laid on, supporting visual cues.

There's something wistful about gazing through a train window anyway, and the stories you hear have a slight melancholy that plays up to the feeling. But there are also moments that are funny, playful and sweet (literally), making the whole experience truly delightful. If you're a SE Londoner it's fascinating to have another take on a well-known route, but even if it's not your manor there's still a thrill to be had from experiencing the work surrounded by other people just having their normal day.

The whole thing is free, including your train ticket to Greenwich (but not back). Since you're there, why not catch another GDIF performance?

*Except tomorrow, when the trains will leave from Cannon Street. Southeastern only mentioned on Thursday that there was engineering work, so 11:18 had no time to prepare an alternate version. You'll get a part-performance but, hey, it's free right?

Mean Between Times leaves from the information desk at Charing Cross station 11am, 1.30pm, 4pm today, Cannon Street 11am (BSL), 1.30pm, 4pm Sunday 24 June, and Charing Cross 3pm and 7pm 25-30 June. It's all free. There is a change at London Bridge which involves stairs.