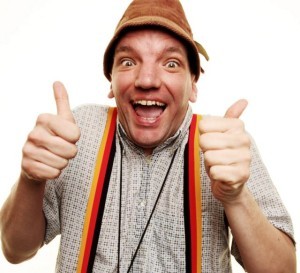 Sunday: The Working Men's Club is preparing for its Edinburgh debut; cheer 'em on at the Leicester Square Theatre (12pm, £6). If you're more of an evening comedy person head to Chelsea's Drayton Arms (8pm, £6 / £3) for Paul F Taylor and the unstoppable Phil Nichol.

Wednesday: We snarfed with laughter when we saw Austentatious, an improvised 'unseen' Jane Austen novel. Catch them yourself at the Wheatsheaf (8pm, £5).

Richard Herring and Andrew O'Neill try out their Edinburgh shows at the LOL Comedy Club in Kensal Green (8pm, £5). We don't often see a line-up and yelp with glee, but we did at that one.

Thursday: How great an idea is this? A comedy gig at Foyles, and entry is simply a receipt for any book worth at least £4.99 (from Foyles, obv). The acts are appropriately whip smart, being Bridget Christie, John-Luke Roberts, Nat Luurtsema, Tiernan Douieb and hosted by Chris Coltrane (7pm).

We also have to mention Chat Show Roulette at the Soho Theatre, where comedians are interviewed as a character whose traits are determined by the audience. Tonight's guests are Matt Lucas, Katy Brand, Adam Riches and Dave Schneider, hosted by Justin Edwards (9.15pm, £12.50). Also on Tuesday – book fast, Wednesday's already sold out.

Saturday: New York's Found Footage Festival makes its UK debut at the Soho Theatre. Hosted by writers from The Onion and David Letterman, they'll take you through the odd things they've found on VHS tapes in charity shops and car boot sales down the years (9.30pm, £15 / £12.50).