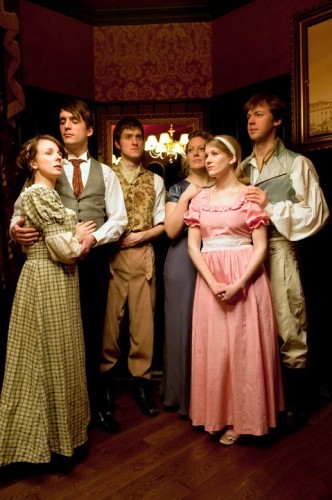 It's difficult to describe improvisation because, by its very nature, it's different every time. But with Austentatious there is a least a very particular theme: the lost novels of Jane Austen.

Our Jane was such a bloody genius that of course she produced more than six finished works. It's the job of this troupe to recreate them, one at a time, before your very eyes. You'll have to help by suggesting which of Jane's beloved works they'll perform for you – should it be A Suitable Boy, a book Vikram Seth totally ripped off?  Or the work we saw, Rich People and the Poor People Who Clean Them?

The cast of Austentatious are Rachel Parris, Amy Cooke-Hodgson, Andy Murray, Graham Dickson, Joseph Morpurgo and Edinburgh nominee Cariad Lloyd, all whip smart and on the button funny. It's difficult to sustain an improvisation over a sketch, let alone one hour creating a (relatively) coherent narrative but they do it. Expect a spot of fourth-wall breaking, self-referential gags and some laugh out loud moments and you won't go far wrong.

They perform fortnightly and the next four shows are upstairs at the Wheatsheaf on Rathbone Place, the perfect setting with its Regency paintings and small leaded windows. Do book in advance, it was so packed when we went the audience ended up perching on tables.

Austentatious: An Improvised Novel takes place every other Tuesday. Check website for dates and venue. They are currently resident at the Wheatsheaf, 25 Rathbone Place W1. Tickets cost £5 and places can be reserved by emailing austentatiousanimpronovel@gmail.com.