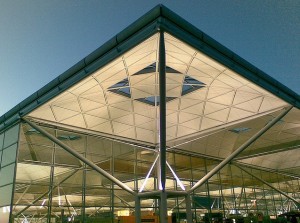 Boris Johnson is back on the subject of airports. Never mind having the cable car to play with from next week, he's been saying that a second runway at Stansted and extending Crossrail to link up with it would be "a fantastic step in the right direction".

Boris and airports is a bit like a kitten with its favourite toy: he Just Will Not Let Go. And when the kitten's owner tries to take the toy away they get scratched; the owner in this disturbing metaphor being David Cameron. The Prime Minister might have been peturbed to read an interview with Boris in New York Magazine, given during his recent jaunt Stateside:

We have to have a new airport. One of the only reasons I want to assume supreme power in England is to make sure that happens.

Then the Mayor pauses, and says

For God’s sake, don’t quote me saying that.

Journalists, eh? The Thames Estuary airport is still firmly on Boris Kitten's agenda – Stansted would only be a stopgap until he can persuade the government to give him a new catnip mouse, er, back away from its scepticism over a new airport. The Coalition will announce its long-term aviation strategy over the summer. BAA doesn't think much of the Stansted plan, saying the Essex airport already has spare capacity but airlines aren't interested in taking it up.

Photo by Daryl Wilkes from the Londonist Flickr pool