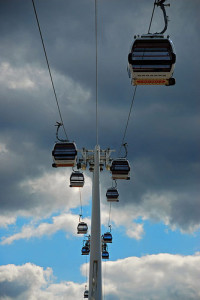 The cable car linking Royal Docks with North Greenwich will open on 28 June, Transport for London has confirmed.

In transport terms, it's not cheap: the adult fare is 70p more than the Thames Clipper services that run across the river, and fully £4.30 more than the free Woolwich ferry. Making the same journey via the slightly-longer Tube / DLR route would cost £1.50 during peak hours. But then you'd be missing out on the experience of gazing across vast tracts of London's eastern fringes.

A better comparison is with the London Eye, which at £19 for a 30 minute trip, works out at 63p per minute. By design or coincidence, the five minutes you'll spend in the cable car works out at almost the exact same price, 64p per minute, on Oyster, or 86p for the full cash fare. In other words, the cable car seems to be priced as a tourist attraction, not the integral piece of transport infrastructure we've been promised.

A return trip will set you back £6.40 on Oyster while a 10 journey pass will trouble you the sum of £16; in a nod to the Emirates, the corporate sponsor, this option has been dubbed 'frequent flier'.

The cable car will be operational from 7am until 9pm on most days, opening slightly later on weekends, but it will be opened later during special events.

The Mayor, TfL, Emirates and everybody associated with the project will be thrilled to have it operational ahead of the Olympics, when it will no doubt gain a significant publicity boost. But the real test of its popularity will come once the Games have finished.