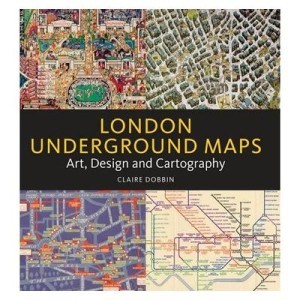 A kind of weird magic is at play whenever a good artist or draughtsman turns his or her easel to the Tube. The London Underground has been the muse and fountainhead of a disproportionate number of memorable diagrams, maps, posters, representations and general works of art. This new book, which accompanies London Transport's Museum's excellent Mind The Map exhibition and is authored by curator Claire Dobbin, walks us through some of the best.

A full third of the book is given over to one artist: MacDonald 'Max' Gill. From 1914 to 1932, Gill produced a series of colourful hand-drawn maps of London. Commissioned by the Underground, these showed the locations of Tube stations surrounded by a riot of information, anecdotes and jokes about the local area. The 'Wonderground' maps were a huge hit at the time, but have since dropped out of general public consciousness. The book and exhibition both give Gill a fresh prominence he clearly deserves.

The second section deals with London's ultimate design icon: the Tube map. Like Gill, its designer Harry Beck was something of a forgotten hero outside of design circles, until his story was brought to the masses in Bill Bryson's Notes From a Small Island. Since then, the details of how Beck jettisoned geographic accuracy in favour of simplicity have been told many times. The present account puts a heavy emphasis on the maps of Beck's predecessors, and those who came afterwards. Beck's innovation is seen more as a step in an evolutionary process than an out-of-the-blue revolution.

The final chapter looks at how the Tube map has inspired other transit maps, as well as prompting a "plague of unauthorised adaptations" (many of which are indexed here). The cultural worth of old favourites like Simon Patterson's The Great Bear and David Booth's The Tate Gallery By Tube are discussed, while several lesser-known examples are also highlighted.

The shelf dedicated to books about the Tube is already as crowded as a Piccadilly Line carriage in the rush hour. As with the accompanying exhibition, though, this book manages to tell a few fresh stories while plundering London Transport Museum's archive for some rarely seen images. Those who've never really considered the subject in any detail won't find a better introduction. Those who have read similar books will relish the Gill chapter, a story never previously told to such depth.

Underground Maps: Art, Design and Cartography by Claire Dobbin is out now from Lund Humphries in association with London Transport Museum. Buy here.