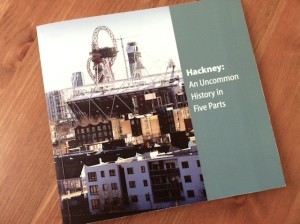 Hackney seemingly attracts the attentions of writers more than any other borough. With good reason. It's a staggeringly diverse region both in terms of its population and its architecture, with a colourful social history that goes back to Tudor times.

The titular ''five parts" of this new history of Hackney offer snapshots of local life in 1612, 1712, 1812, 1912 and 2012. As the foreword asserts, this is neither a conventional history nor a comprehensive one. Instead, the authors have hand-selected illuminating episodes from the area's past, like sheafs of wheat standing in a much wider field.

The allusion is apt for Margaret Willes opening chapter on Hackney in 1612, when much of the district was arable land, dotted with farms and mansions. Matthew Green then takes the story a century forward, when Hackney became the playground of the middle classes. Green dwells particularly on the rise of the London coffee shop, his specialised subject. Ann Robey and Lisa Rigg carry things on into the 19th and 20th centuries, when the once-open lands quickly filled up with housing developments. The final chapter by Juliet Gardiner and David Garrard tackles the tumultuous events of the past 100 years, when Hackney faced the challenges of aerial bombardment in two world wars, a rapidly changing demographic, problematic housing developments, the recent Janus of gentrification, and preparation for the Olympics.

This is a timely and well-researched guide to one of London's most diverse boroughs, and richly illustrated to boot. Editor Margaret Willes has done a smashing job of keeping a constant tone and quality across five centuries and six historians.

Hackney: An Uncommon History In Five Parts is out now from the Hackney Society. Buy here.