We're fibbing. It's not a top 10. We can't be expected to sit through every film and TV moment featuring fake Majestys. But nevertheless, here are ten of our favourite treasonous impostors to tie in with the Jubilee.

Often upstaged by Prince Phillip and the Queen Mum, Her Latex Majesty nevertheless raised a regular chuckle on this much-missed satirical puppet show. Impersonator Jan Ravens went on to play many of the female parts in Dead Ringers, including the Queen again (see later). Here, our Liz works her way through her Christmas card list:

Jeanette Charles (we'll be hearing more from her later) plays the monarch in this dream sequence, which shows the undoubted outcome if the Queen (and Princess Diana) had ever met Chevy Chase. (Clue: this being a Chevy Chase film, it's about as funny as a Corgi's rectum.)

The first and greatest of the spoof cop trilogy revolves around a plot to assassinate Queen Elizabeth II (played by Jeanette Charles again). In the course of the film, Her Majesty bowls a wicked curve ball, takes part in a Mexican wave and, most memorably, slides along a banqueting table beneath a sprawling Leslie Nielsen. In colour. 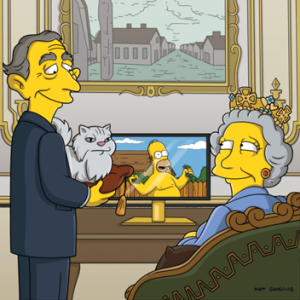 According to the Simpsons Wiki, the head of the House of Windsor has made four appearances on that show, most recently in the 2010 episode To Surveil With Love, where her voice was supplied by Eddie Izzard (there really is no end to the talents of our future mayor). Springfield's burgeoning collection of CCTV cameras turns out to be the infrastructure of a reality TV show to amuse us Brits. At the end of the episode, the Queen remarks "I will miss that Ralph Wiggum boy...reminded me of my own son". Prince Charles, standing nearby, retorts: "My cat's breath smells like cat food". Both royals were voiced by Izzard. The incident is not thought to be based on actual events.

Switching allegiance from one spoof franchise to another, Jeanette Charles once more takes up the crown (she doesn't even look much like the Queen; what gives?) in this third Austin Powers outing. In a serious lapse of judgment, the Queen bestows a knighthood on our toothsome hero. Hilarity thinks about ensuing, but doesn't.

Helen Mirren's portrayal of the Queen in the aftermath of Diana's death is surely the most high-profile of recent years. The lead actress won an Oscar, Bafta and Golden Globe for her troubles. Rumours that Helen Mirren only got the part thanks to her magisterial initials were quashed when leaked screen-tests showed Hayley Mills, Hannah Montana and, um, Honey Monster also auditioning for the role. Perhaps. 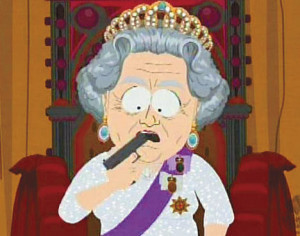 The (sometimes) hilariously offensive cartoon plumbed new depths a few years back by showing the Queen committing suicide via a pistol to the mouth. The video is available on YouTube if you want to go looking for it, but be warned that it's introduced by an extremist republican who "agrees with shooting the queen in the head".

More Oscar-bothering royalty, mostly concerned with the previous generation. A young Elizabeth does make a few cameos, however, played by Freya Wilson. Here she is making the first in a lifetime of balcony appearances. 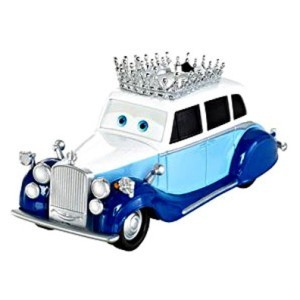 You know how you've always wondered what the Queen would look like if she were an anthropomorphic vehicle? Well watch Cars 2. The petrolheads at Pixar created this august motor, a classic 1950s Phantom IV with registration plate DEII 1952. Known as The Queen and voiced by Vanessa Redgrave, the royal ride is accompanied by Prince Wheeliam. Where's Carmilla Park-er Rolls?

While digging around we found this Mirror article, which lists out various other Queenic instantiations from recent years, including Emilia Fox, Emma Thompson and Samantha Bond.

Let us know in the comments if you know of other replicant royals.