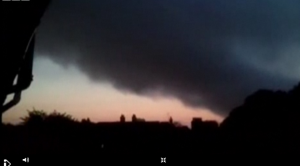 Twelve fire engines were called to Peterboat Close (map), Greenwich last night to tackle a major warehouse blaze. It took firefighters over three hours to bring the fire under control. Reports suggest up to half of the building, which is 80 metres long, was destroyed by the fire.

Photos show a giant plume of smoke rising from the south-east of Greenwich Peninsula into the dawn sky, reducing visibility as far away as Old Kent Road. An air raid siren was sounded by authorities to warn local residents of possible danger. The warehouse was thought to contain "swimming pool chemicals", but more dangerous substances were under threat in a neighbouring building.

Although the smoke was thought to be harmless, residents were advised to keep doors and windows closed as a precaution.

Image still taken from a video by J0hnGS08 — watch the full video here.