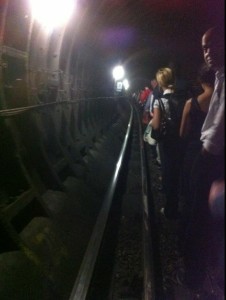 The train that caused yesterday's Jubilee line meltdown was one of the two specially decorated Diamond Jubilee ones. It would be snigger-worthy, if passengers on said train (and one behind) hadn't been stuck underground at St John's Wood for four hours, on a very hot day, and ended up being evacuated via the tracks.

The rest of the line was snarled up with trains not even leaving Stratford two hours after the incident first happened. One woman is reported to have had a fit, while others reported a lack of information. Transport for London (TfL) are offering £40 distress payments plus ticket refunds for anyone caught up in the train failures.

TfL Commissioner Peter Hendy was up before the London Assembly Transport Committee this morning. The tube's recent lack of reliability (District Line commuters, feel free to vent your frustration in the comments) was high on the agenda, particularly with the Olympics now so near and the Jubilee line serving so many venues. Hendy said some tube failures will be inevitable during the Games, but that TfL are doing preventative maintenance. Given how much work the Jubilee line has already had on it, we're not sure this will be enough to reassure Londoners. If you want to question him yourself, go to the London TravelWatch Board meeting next Tuesday.

For mainline train users, TfL confirmed they will express interest in bidding for the Anglia and Southeastern franchises this year – an election pledge to bring Metro rail services into the Overground. River bus services are also going to be increased to Putney.