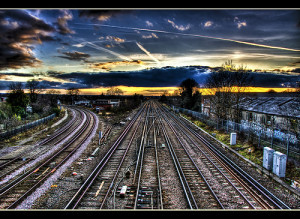 Earlier this month, Boris Johnson set out his plans to bring London's rail services under the control of City Hall and TfL in a bid to improve London's transport.

Mainline rail routes into London are currently franchised to private companies with varying degrees of customer service, timeliness and efficiency and the mayor believes he can do a better job. A recent Telegraph poll suggests that over 75% of other people think he can do a better job too. So does Ken Livingstone, though obviously he's planning in terms of himself being mayor rather than Boris. Let's take a look at their plans for devolution of rail franchises in London:

To be honest, there's nothing that surprising in either of those proposals. It's not rocket science to deduce that rail users would quite like clean, safe trains and stations, frequent trains and up-to-date information without having to rely on Twitter. The cycle parking is a biggie too; the profile of cycling and its subsequent politicisation has increased dramatically in the last year or so and a rusty railing to chain one's bike to outside a station is no longer acceptable. 853 blog recently (and reluctantly) let the cat out of the bag about the vastly improved cycle parking at North Greenwich.

Southeastern and West Anglia have been identified as prime candidates for devolution. The former has been plagued by complaints about poor services, ranging from missing stations to an apparent inability to run trains in either hot or cold weather.

Can TfL afford to run suburban rail services? According to Boris Johnson's office, the £100m savings made over 20 years by devolution would enable the refurbishment of 100 stations. But as we know, the mayor is committed to further fare increases which could mean unhappy passengers seeing higher fares for an unimproved service before things reach London Overground standards. Ken Livingstone has pledged a 7% cut in fares which will obviously win him some friends among commuters but will he be able to provide the investment necessary for future infrastructure costs? Either way, Londoners will want to see those pre-election promises come to fruition.