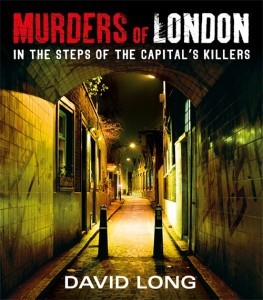 David Long's previous book wandered through London's alleyways, those dark and overlooked spaces intimately associated in the popular imagination with the worlds of Jack the Ripper and Jekyll and Hyde. It seems grimly apt, therefore, that the author's latest offering deals with the capital's most notorious murders.

The first thing one notices is just how many infamous slayings our city has harboured. The Ripper murders, Ratcliffe Highway deaths and Kray killings immediately spring to mind. So too the likes of Christie, Crippen, Nilsen and Lucan. Then there are the political assassinations, such as Georgi Markov who was shot with an umbrella gun on Waterloo Bridge or, more recently, Alexander Litvenenko, the only known murder victim to be dispatched by radioactive polonium.

These are the tip of the dagger, with dozens of lesser-known stories covered in pacey but respectful prose. Each murder scene is tracked down and photographed, which is fine until you discover that your favourite branch of KFC was the scene of the 1949 acid-bath murders.

Long concentrates on crimes with an element of mystery, passion, scandal or oddness. The murderers usually act covertly and alone. You won't find any coverage of the many gang-related stabbings and shootings of contemporary London, or terrorist atrocities such as the 7 July bombs of 2005. But that's not a criticism. The book never sets out to be comprehensive (how could it be?) or to act as a commentary on society. Instead, we get a fascinating if slightly uncomfortable tour of the capital's most infamous crimes.

Murders of London by David Long is out now from Random House. Buy here.