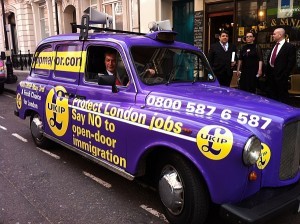 Continuing our look at the Mayoral party manifestos, UKIP (or Fresh Choice for London, as they're billing themselves this time around) launched theirs on Thursday. It's a brief document (PDF), but launch speeches from party leader Nigel Farage (pictured, in the UKIP taxi) and Mayoral candidate Lawrence Webb made it very clear that if you're a small or medium business owner who drives, this manifesto is aimed squarely at you.

On transport, UKIP want parking controlled centrally instead of by the boroughs, 20 minutes free parking across London, free Saturday night and all-day Sunday parking and to scrap the congestion charge. Like the Lib Dems they have an idea for a transferable bus ticket, but lasting 70 minutes instead of the Lib Dem hour.

Another policy similar to the Lib Dems, but amped up, is the idea of getting people involved in policing, But where 'Paddick Patrols' would be the "eyes and ears" of the police, UKIP want to encourage Londoners to perform citizen's arrests for crimes like drunkenness, shoplifting, vandalism and – rather dangerously – possession of weapons.

As befits their anti-EU stance, UKIP also believe ending open-door immigration would create more jobs for Londoners, and want to prioritise Londoners (the definition seems to be someone with a 'historical link' to the capital, rather than having a London borough on your birth certificate) for housing and jobs and plan to cap the number of immigrants allowed to settle in London. They also want to reduce VAT on beer and cider to 5%. Currently the Mayor doesn't have the power to do these things, so we asked Lawrence Webb how he planned to achieve them. We'll bring you the answers tomorrow.