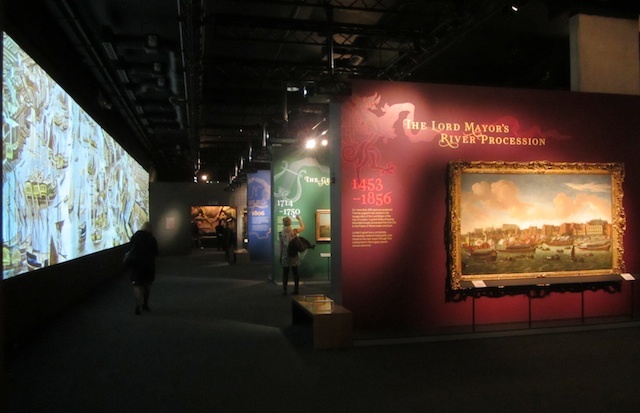 The first object in the National Maritime Museum's new exhibition is a giant and exceptionally detailed view of the river at Blackfriars by Canaletto. It's a stunner. The Lord Mayor's barge travels upstream to Westminster surrounded by a hundred smaller craft. This is a scene from the 1750s, but also a glimpse into the future. In a couple of month's time, an even larger fleet will journey down the Thames to mark the Queen's Diamond Jubilee.

Royal River is the museum's contribution to that milestone, looking at the last 500 years of the Thames and its royal connections. The exhibition is guest-curated by professional monarch-botherer David Starkey. We found the historian's recent Henry VIII exhibition at the British Library a little exhausting, stodgier than an undercooked Tudor plum pudding. We entered Royal River prepared for a similar infoslog. Here, though, the objects are well chosen and well spaced. You can examine every item and read every label in around an hour and a half.

A selection of impressive centrepieces — life-size royal portraits, bits of ships, panoramas — are well complemented by smaller curios. Original instruments from the orchestra that premiered Handel's Water Music, for example, are on show near a knife set hewn from the timber and iron of Old London Bridge.

The presentation, indeed, is sumptuous. The main wall is illuminated by changing panoramas of the river. Opposite is a series of colour-coded bays, each themed around one aspect of riverine pageantry and performance: royal barges, Lord Mayor processions, Nelson's funeral, littoral palaces, and much more. Everywhere, gold leaf sparkles from picture frames and royal treasures. It is an exhibition fit for a queen.

This regal view of the river is, of course, only one side to the Thames. Head upstairs, or to the nearby Museum of London Docklands for an everyman's history of "London's grandest street". Within the self-imposed focus, however, Royal River is a liquid history that couldn't be more solid.

Royal River is on at the National Maritime Museum, Greenwich runs from 27 April to 9 September 2012. Entrance is £11 adult, £9 concession, £5 children. A programme of events (including a Londonist quiz — more tomorrow) supports the main exhibition.