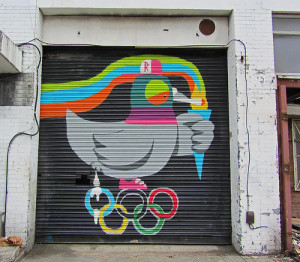 On the second heat of our mayoral election coverage, Olympics issue, we look at how the Games will work with local communities and what it means for them.

Event 2: The Synchronised Swim  — connecting with the host communities and promoting their interests

The Olympic Games are undeniably a world event, with billions of viewers from countless countries expected to tune in for the opening ceremony. For many people, this will be their first proper view of London’s vast construction projects. But for Stratford locals the road to the Games has been a long and frustrating one, having watched swathes of their turf be torn up and rebuilt since 2005.

The previous mayor’s ambition to positively transform the East End is well documented. Having become Olympic host, Livingstone laid out five commitments to Londoners: promising sporting initiatives; jobs and business opportunities; a transformed 'East End hub'; investment in sustainable communities; and a showcase for London’s ‘diverse’ and ‘welcoming’ atmosphere. But he was spared the duty of living up to these commitments, losing his job just as the time came to dig in and make them happen.

Having moved into Ken’s old office, Boris continued to emphasise the importance of socially responsible development, and to this day expounds the equal importance of a successful games and a productive legacy. To add to this, he promised a dazzling spectacle which will bring a 'party atmosphere' to the games.

The five Olympic Boroughs — Newham, Tower Hamlets, Hackney, Greenwich and Waltham Forest — were promised unparalleled investment, and have seen spending on the Games multiply beyond anyone’s original estimation. But it's worth checking if the £9bn Olympic funding can claim to have achieved these commitments:

There is clearly a lot more to be done to ensure that the Olympic legacy comes close to the original goals. Continued commitment to the legacy aims through the newly created Olympic Development Corporation will be all-important to the East End’s prospects for successfully completing its transformation. No candidate has a proven record of success here but one will be given the challenge of ensuring that the people who have been most affected by the Games get the results they were promised.

Time to award the medals:

Gold Medal: Ken Livingstone
Ken was never the most likeable chap and often fell short of connecting with voters during his time in power. But he managed to set the tone for an Olympic event which aimed to be more than a sporting spectacle. You get the feeling that Ken’s opening ceremony would have amounted to a dismal documentary about job creation and East End water quality — but all the more money left over for affordable housing.

Silver Medal: Brian Paddick
Quiet Brian broke his Olympic silence with announcements of a renewed effort to cement the Games’ legacy. The Lib Dem manifesto included measures to correct past mistakes by ensuring that the Olympic Legacy Corporation sets and achieves ambitious targets for job creation, affordable housing and sports participation. But challenging the Legacy Corporation to succeed where the (vastly better funded) pre-Olympic bodies have failed is a tall order.

Bronze: Boris Johnson
Boris had the sense to realise he was onto a good thing as the world applauded a games blueprint which promised to bring lasting benefits to the host communities, rather than leaving residents to look after crumbling Athenian ruins or ostentatious Beijing money pits. If he didn’t have such magpie-like attraction to glitzy spectacle, he might even have got it done.

False start: Jenny Jones
Passionate about East End road safety and community gardening initiatives — and equally keen to give a unique take on housing reform and green job creation — Jenny Jones has only failed in pushing her unique agenda near to the centre of debate. Jones’ plans to promote equality and sustainability are the most challenging of any of the candidates and could be grass-roots vote-winners if taken to voters unsatisfied with their share of the Olympic budget. But she has not yet managed to confront the “macho” (her word) frontrunners and liven up the predictable Johnson-Livingstone exchanges.