Mayoral Elections: Getting London Ready For The Games

By Londonist Last edited 100 months ago
Londonist Mayoral Elections: Getting London Ready For The Games 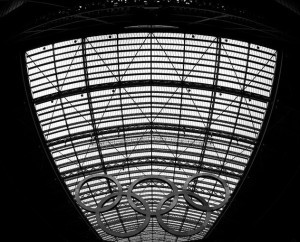 In the first event of the Mayoral Election Quadrathlon, our week-long focus on the candidates' attitude to the Olympics, we test our four competitors on their ability to go the mammoth distance required to bring the Games to London.

First event: The Marathon — Getting London Ready for the Games

Almost seven years after the Games were awarded to London, vast areas of the capital have been transformed. Gone are some of the East End’s most dilapidated industrial zones and in their place we have gleaming Olympic monuments.

The Meccano doughnut of the Olympic Stadium, the Copper Box and the squashed albatross Aquatics Centre have all added new silhouettes to the burgeoning East End skyline and are almost fully prepped for the athletes’ arrival. Boris can now proudly boast that the venues were delivered on time, under budget and ready to provide for Londoners’ sporting needs for decades beyond the closing ceremony.

Why, then, are voters still unhappy?

While still at the head of the GLA, Ken boasted that winning the Olympic Games was nothing more than a cunning ruse (of his making) to draw in billions of pounds of redevelopment funding that the East End required. This piece of trickery set the tone for the 2012 games: these Olympics would be all about regeneration, sustainability, legacy — and once in a while we might bother to mention that there’s a sporting competition coming up.

In practice, it was a sportsman who pulled off the trick on Ken’s behalf. Lord Coe gets the credit for turning Ken’s “joke” bid into a compelling real-world prospect founded on the concept of an Olympic legacy, for which IOC President Jacques Rogge, hailed London as the “blueprint for future Games hosts".

Like Coe, officials outside the GLA can claim credit for keeping the Olympics out of the election-time headlines. LOCOG and the ODA’s smooth running of the preparation phase — spanning Ken and Boris’ stewardship — has ensured that London 2012 is “not the political hot potato it might have been” (as BBC’s Roger Mosey notes). But the fact that little political currency can be gained from campaigning about the rights and wrongs of the Olympic planners’ organisation will not stop the games from being a prickly issue for voters.

Londoners — as well as taxpayers from across the country — have borne the brunt of the financial burden for an event once touted as a perfect partnership of public and private enterprise. The city’s voters have watched as the budget for the games has quadrupled, from the £2.4bn initially estimated, to the £9.35bn figure which Boris can now claim to have kept (just) inside. This expanded figure includes an initial £1bn bill for the London taxpayer even while the majority of the cost was shunted outside the capital.

The budget, which Ken originally claimed would amount to no more than the cost of a “walnut whip a week” for London’s council tax payers, included a contingency of £2.7bn inserted by then-PM Gordon Brown, and which Ken assured taxpayers would remain largely unused.

Now in Boris's hands, the real cost of the Games is estimated in an independent committee to exceed £10bn, with the ‘under budget’ figures achieved by subtracting the expenses which officials believe will be recouped in the sale of Olympic facilities to the private sector.

In his new Olympic manifesto, Boris claims that not a penny more of Londoners’ council tax will go towards the Olympic Park once the closing ceremony has passed. But with central government funding set to dry up and plenty more work required to make the elite Olympic facilities attractive to (so-far reluctant) private investors, this promise could go the same way as the RMT no-strike agreement and late night weekend tube travel.

Would Ken — or any of our other mayoral hopefuls — have kept costs lower? The Lambeth newt-fondler’s affection for ostentatious celebrations of London’s “world position” is certainly no match for Boris’ — and we might reasonably expect that the less flash left-wing candidates would have held back on some of Boris more extravagant preparation. Where Johnson injected another £40m into the opening ceremony, we can guarantee, at least, that Green Party candidate Jenny Jones wouldn’t have — after all, she’d trade the whole thing for a weekend in a Glastonbury field.

The Green guru has also taken centre stage in backing the delivery of those all-important Olympic buzzwords. Setting aside ‘redevelopment’ and ‘legacy’ (they’ll be getting their own day’s-worth of coverage this Wednesday and Friday respectively), the row concerning sustainability has been a surprise sparring ground for the four contenders.

Jones, along with fellow Green AM Darren Johnson, led the applause for the Olympic Stadium as the “most sustainable ever built” but subjected the other environmental claims to harsh scrutiny. On Boris’ watch, the Games have fallen behind targets on air pollution and renewable energy, and Jones joins Lib Dem AM Caroline Pidgeon in protesting the 4,000-strong army of chauffeured BMWs ordered to transport Olympic officials across the city.

Not one to be left out, Ken has been on Boris’ case about Olympic Stadium sponsor Dow Chemical’s links to the Union Carbide gas leak tragedy, while fellow Labour and Tory AMs have put aside squabbling and joined forces to clean up East End waterways.

In one noteworthy final coup, Jenny Jones pulled out the sustainability trump card by taking on Olympic top partner McDonalds over the carbon footprint of their chickens — winning a substantial victory for London’s eco-friendly nugget fans, and earning sustainability kudos from the rest of the class.

With cash-strapped voters already conscious of the cut corners and ever-rising costs, we will have to wait until 3 May to see if avoiding Olympic crises and showcasing London’s capabilities have come at too high a cost for Boris. Whether Londoners will be satisfied with their new monuments and the promise of a sporting spectacular is a moot point — whether they believe the other contenders could have done better is all important.

Time to hand out the Londonist medals for G.L. Athleticism!

Gold Medal: Jenny Jones
The prospect of combining the Olympics with Glastonbury Festival is too enticing to ignore. Imagine synchronised swimming to the sweet sounds of Paul Simon. Imagine Morrissey crooning tenderly as another pole-vaulter topples the bar. We think you’ll agree, we missed a big opportunity.

Silver Medal: Brian Paddick
We know we haven’t mentioned him yet, but that’s because he doesn’t like to say much about the Olympics. In 2007 he offered us it all, saying: “We need to have value for money for every single pound spent – but we must put on the best possible show.” Five years later, he hasn’t yet offered any explanation for how he would have achieved this — but you can’t argue with an empty statement like that.

Wooden spoon: Shared between Boris Johnson and Ken Livingstone
At the end of the day, these two have both been caught playing the same games that every Olympic organiser has gone for: underestimate the costs and overestimate the economic returns until the sums don’t add up anymore; slap another couple of billion on the budget and keep alive the myth that building for the Olympic Games is anything other than a vanity project. If we had to choose, we’d say Ken just edges it, for adamantly refusing to care about the “sports” aspect of the Olympics.

Photo by Sean Batten in the Londonist Flickr pool