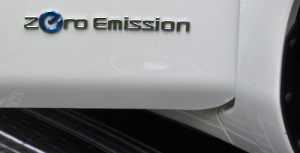 Boris Johnson's self-imposed target of 100,000 electric vehicles (EVs) is looking on the lean side as only 588 have been registered in London in the three years since he made his pledge, giving EVs just 0.08% of the capital's 3m cars.

The mayor was criticised last year by the Green party over the scaling-back of his original proposals and by April last year only 534 people had taken up the government's £5,000 grant to buy EVs. Figures published by Society of Motor Manufacturers and Traders (SMMT) suggest either a massive success or a slow take-up, depending on how you choose to spin the data — 2011 saw 1,082 total EVs registered against 138 in 2010. It's certainly a big increase, but it's nowhere near Boris's projected 100K (although his disclaimer of 'as soon as possible' does allow for some wiggle room presumably).

Despite the £5,000 grant, the electric vehicle revolution is in its infancy; the choice of eligible cars is tiny, with just five being currently available but due to expand to nine by the end of 2012. Going electric is also costly — the Nissan Leaf starts at £25,990. Availability of charging points and the car's travelling range are also concerns; no-one wants to run out of power on a busy roundabout. SourceLondon's charging point map shows a growing network of around 400 but still far short of the 1,300 points promised by 2013. That's next year, folks.

The motivation of car buyers is also questionable. £25K is a high price to pay to be a member of the environmentally-friendly motoring club and given a choice between spending £5K on a reasonable second-hand petrol or diesel car and £20K on an EV (with grant applied) you'd have to be pretty determined to prove your green credentials to want to part with that extra cash, especially in these times of austerity. And for inner-city driving, the whole raison d'être of the push to reduce pollution via the EV grant, a car is not always the most practical transport solution anyway. That leaves the occasional run out of town, away from all those lovely charging points. What's that you say? A range of 110 miles? Oh.

With any technological innovation, early adopters pay the highest price. Within 10 years we could see a far more extensive range of attractive, cheap-to-buy electric cars with a greatly-extended battery life which would make them a viable option for those on lower incomes. We think that over-reliance on the electric vehicle revolution to significantly address carbon emissions in London may be a tiny bit premature.