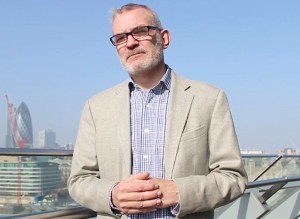 Andrew Boff is a Londonwide ('top-up') member of the London Assembly sitting on the Conservative side of the horseshoe. He was elected in 2008 and previously served on Hillingdon and Hackney councils (he's running for the latter again this year). We asked him to tell us about the work of the Assembly, because it's not just the Mayor we're electing on 3 May.

Apart from scrutinising the Mayor, what does the Assembly do that we might not know about?
We have a remit to raise issues of interest to Londoners, we have a free rein to pick up items of concern and lobby the Mayor, government agencies and private companies to change things for the better. It's a broad responsibility. We also raise items of casework about problems people may be having with parts of the GLA family – Transport for London, the police and so on.

What extra powers do you wish the Assembly had?
I wish we could raise legislation and check the power of the Mayor. I'd also like a broader remit to run services; the Mayor has a strategic level across London but the Assembly could be more like a functional body.

What do you personally feel most proud of during your time on the Assembly?
Well, pride is a sin! But I've been encouraged by changes in areas that are important to me. Family housing is more prominent now, there's been a move away from rows of dull apartments. We're building communities not dormitories for City workers. I'm hopeful the work I've done on overcrowding might start to change the way we consider what types of properties need to be built. The most important issue in London is housing, it's causing and building up so many problems for the future yet rarely gets a look-in in Mayoral debates. But over the last four years we've started to realise its importance.

I'm also pleased I've had some say in the plight of women in the sex trade who are subject to violence on a regular basis. I hope to persuade the Mayor to change the manner of policing to encourage women to come forward.

If Londonist gave you £60m, how would you make London better?
I'd give it to the boroughs. It's all too easy to say we need a Londonwide approach, for the GLA to interfere and solve problems. But the best solutions are small and local ones. I'm a localist and I don't like the idea of sources on high doling out money. If they wanted guidance I'd suggest improving sports facilities on a local level, improving the condition of them, bringing them up to standard and providing equipment for local sports clubs.

[We then started chatting about the purpose of the Assembly; we didn't ask Darren Johnson, Joanne McCartney or Mike Tuffrey about this, but thought we'd include Andrew's thoughts anyway.]
The London Assembly is a waste of money. No parties fight on a manifesto, the Mayoral manifesto is the party manifesto and some party members might have different opinions to their candidate. I'd like to change it so that before the next election there are differences between the Assembly members and their Mayoral candidates. It's difficult and oversimplified running on a manifesto driven by one candidate.