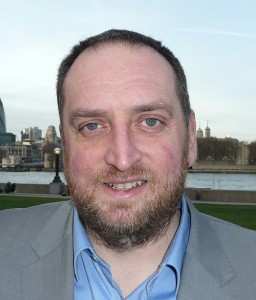 Darren Johnson was elected to the London Assembly as a Green Londonwide ('top-up') member in 2000. He's also served as a Green councillor in Lewisham since 2002. We wanted to know more about what the Assembly does and he obligingly answered our questions.

Apart from scrutinising the Mayor, what does the Assembly do?

The main part, aside from scrutiny, is speaking up for Londoners; looking at the bigger picture and how other companies and organisations impact Londoners. For example, one of the first things I worked on looked at water shortages in the capital. We had no power over Thames Water's leaking pipes but the media pressure the report generated led to their pipe replacement programme.

Something we've realised as we've looked at the powers of the Mayor and Assembly is there isn't much power there, and it's mainly about shouting.

Shouting can get things done as long as there's a clear focus behind it, identifying problems and proposing solutions. The Assembly was the first public body to look at smoking in public places, seeing how it worked in the Republic of Ireland. That report and recommendations helped move the agenda forwards. There are 25 Assembly members and over 70 MPs for London, so Assembly members have a higher profile when it comes to raising awareness.

What extra powers do you wish the Assembly had?

The Assembly has just got more powers under the Localism Act. We've always been able to amend the Mayor's budget with a two-thirds majority vote, but we've never had that power in policymaking. Now we can veto policies with a two-thirds majority, and having a vote means the issue has to be publicly debated which increases accountability and media attention. Having one person making decisions isn't healthy and there have been some cock ups from both Ken and Boris. I think you can compare the Assembly to the European Parliament. It started off as a scrutiny body but over time acquired more decision making powers.

What is a Londonwide Assembly member? Who do you represent?

I represent anyone who wants to approach me with an issue of concern, and I'll take it up and respond. Clearly I represent a particular strand of political opinion – hopefully a growing strand of political opinion! At first people came to Assembly members because they were contacting everyone about an issue. Now that's changing; people have more knowledge about what the Assembly can or can't do. It makes more sense to contact your Assembly member rather than your MP over transport or the Olympics.

What do you personally feel most proud of during your time on the Assembly?

There's so much to be proud of. The Greens have punched above our weight when it comes to long-term impact. We played a major role in the budget setting process under Ken's second term, getting a big increase for cycling, climate change and the home energy scheme. Those budgets have largely remained in place under Boris.

I'm proud of the scrutiny work as chair of the Environment Committee, like the water shortages report mentioned earlier. Boris took on board our recommendations on street trees, and the media still uses the statistics produced by our investigation into flood prevention: London loses the equivalent of two and a half Hyde Parks of greenery each year just by paving over front gardens.

If we gave you £60m, what would you spend it on to make London better?

Making junctions safer for cyclists. This would save lives and make roads better for pedestrians. Boris cut the funding for the London Cycling Network – 90% of it was complete but what was left were the most dangerous junctions. Compared to things like Crossrail and the tube upgrade it would cost a relatively small amount of money, yet would improve quality of life and safety.

The Green manifesto for London launched today. We'll cover it next week but if you want to read it for yourself, it's on the Green party website.