Labour Election Manifesto: What Ken Did

By Jonn Last edited 114 months ago
Jonn Labour Election Manifesto: What Ken Did 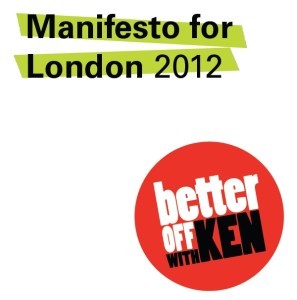 Back in 2000, Ken Livingstone began his first speech as London's mayor with the immortal words, "As I was saying before I was so rudely interrupted 14 years ago..."

This line comes to mind when perusing his latest manifesto for the city's top job (PDF). A fair chunk of it is taken up with the inevitable attacks on the current mayor (for breaking promises, under-investing in transport, throwing money at novelty buses, et al.). And a few bits of it are distinctively 2012 – the exciting proposals to release traffic data in the hope some bright spark comes up with a parking app, say, or the various proposals meant to prevent a repeat of last year’s riots.

By and large, though, the policies proposed suggest that a new Livingstone mayoralty would look a lot like the one we had from 2000 to 2008. There'd be a return of the zone 2-6 Travelcard, more calls for major transport projects, more pedestrianisation, and a new publicity campaign about courtesy on the tube. For good or ill, what Livingstone hopes to offer us will be more of the same.

The manifesto is long (100 pages, which rather puts UKIP's scribbled side of A4 to shame), so we've been unable to list all its promises. Here, though, are the highlights.

The manifesto’s big theme (one which it accuses the Johnson campaign of stealing) is 'Better Off with Ken' – the idea that hard-pressed Londoners will simply have more money in their pocket under a Livingstone regime. He's promising lower fares, lower rents, lower energy bills and London-specific welfare payments.

How many of these you'll qualify for, and what impact they'll have on your household budget, you can find out using the campaign's helpful calculator, but it’s potentially as much as £6,036 over four years.

That is, of course, assuming the campaign's sums add up. We've won’t pretend to have done the maths, but on at least some of the pledges, Channel 4's Factcheck has suggested otherwise.

Elsewhere, he pledges to resurrect the money-saving zone 2-6 Travelcard; to cut the age at which you qualify for a Freedom Pass back to 60 (he reckons Boris nicked this one); and to negotiate for TfL to take control of  more suburban train lines, on the model of the Overground (one of his last administration’s big success stories).

The alcohol ban will stay, though the manifesto snipes that it's being poorly enforced. The Congestion Charge's Western Extension isn't coming back, because it'd cost too much to put the cameras back in. The standard speed limit on residential roads would be 20mph. Oh, and the new bus would be abandoned as a white elephant: those already built would remain; no more would be built. Colour us stunned.

A familiar list of infrastructure projects would be back on the table – Crossrail to Ebbsfleet, Crossrails 2 and 3, the DLR to Dagenham. New additions would include re-routing High Speed 2, to make it less disruptive, and creating suburban 'freight hubs' to aggregate lorry cargoes and reduce the number of them travelling into zone 1.

Turning to those of us on two-wheels, a Labour mayoralty would trial giving cyclists a traffic light filter, to reduce the danger of our being run down by bigger vehicles turning left. It'd also review the cycle hire scheme, and redesign the cycling superhighways (although how is not exactly clear).

The housing crisis features heavily in the manifesto, which argues it’s acting as a brake on London's growth.

It promises to drive costs down and standards up. This would involve releasing surplus GLA land for new housing developments, and bringing back the affordable homes targets which Boris scrapped. It'd also mean the creation of a London Lettings Agency, to cut estate agent fees out of the equation; and a Tenant's Charter, which landlords would need to sign if they wanted to list their properties on the aforementioned.

Mayor Ken would also campaign against commercial developments – like that in Earl's Court – which would force social housing tenants to move against their will. And he'd "investigate providing mortgage deposit guarantees", to help first-time buyers get their first step onto the ladder.

The manifesto also promises to establish a special unit to deal with repeat offenders, and to look into the worryingly high figures for deaths in police custody. He'd also direct the police to prioritise hate crimes, citing both anti-semitism and Islamophobia.

Elsewhere, it pledges to protect funding for rape crisis centres; to make it easier for victims to report crimes to specialists; and to launch an anti-sexual harassment campaign to cut down on street harassment.

Funding for projects tackling gang crime would be devolved to communities. Any school that wants a police officer on site would be entitled to one. He'd also appoint a 'victim's commissioner' and create an online 'track my crime' service.

Ken's manifesto attacks Boris's claim that he wouldn't speak up for the NHS, because it isn't the mayor's job (neither is intervening in tax policy, he points out, and that hasn’t stopped Boris). Mayor Ken would defend the NHS, create a 'London Health Commissioner' to watch over London's health services, and a London Health Improvement Board to co-ordinate services across the city.

He’d also campaign against tuition fees, create a London 'Education Maintenance Allowance' to keep teenagers in classrooms, and work with businesses to create more apprenticeship places. Elsewhere in the public realm, Ken guarantees there would be no more fire station closures.

The manifesto also promises an assortment of other proposals far too numerous to be listed here. Among our favourites:

Perhaps the oddest part of the document, though, is the one labelled "opposing ageism". To show he shares the concerns of the elderly, Ken notes he has often been a victim of ageism himself. This involves helpfully repeating a number of particularly cruel jokes senior Tories have made about him.

Well, that's one way to paint your opponents as heartless, we suppose.