I'm A Reporter, Not A Terrorist

By BethPH Last edited 124 months ago
BethPH I'm A Reporter, Not A Terrorist 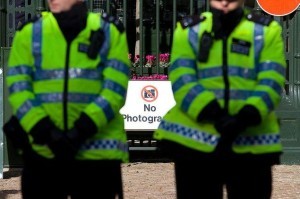 The Guardian is the latest media organisation to fall foul of security guards patrolling private spaces. A journalist for the paper was prevented from filming, then from leaving a public space outside the O2 dome, an Olympic venue.

With the increasing number of privately owned spaces used by the public in the capital, photographers and journalists are regularly accosted by civilian security guards with little or no understanding of the law concerned, or the Anti-Terror Act which they regularly invoke to try and obstruct the public. In the case of the Guardian, the newspaper was told; "We've requested you to not do it because we don't like it," before demanding the footage on the basis that: "It's under the terrorist law. We are an Olympic venue".

Londonist's very own N Quentin Woolf was similarly approached while recording an episode of Londonist Out Loud. Last summer, Shoot Experience made a short film about what happened when their photographers tried to take pictures in the City with astonishing results. Campaign group I'm a Photographer, Not A Terrorist also recently highlighted an incident where a a filmmaker was approached by a GLA employee who insisted they stop filming.

Just to provide some clearly much-needed clarity around public/private spaces, British Security Industry Association guidelines state that "filming or taking a photograph does not in itself indicate hostile reconnaissance or other suspicious behaviour:

"If an individual is in a public place photographing or filming a private building, security guards have no right to prevent the individual from taking photographs."