Security And The City: Shooting In London

By BethPH Last edited 133 months ago
BethPH Security And The City: Shooting In London 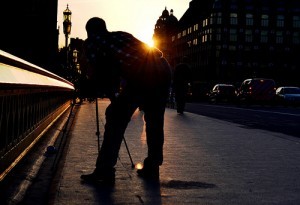 Last month, six people took to the streets of London equipped and ready to shoot. They were quickly apprehended and the police were called. Were they robbers? Terrorists? In fact, they were photographers from Shoot Experience. Their mission? To explore the policing of public spaces by private security guards and the increasing paranoia around photography.

The six intrepid photographers were themselves followed by cameras and the result is a short film called Stand Your Ground. It really is eye-opening viewing - watch it here. All six were challenged by private security guards at least once. In three cases the police were called, though they at least appeared able to appreciate the concept of public space and demonstrate some common sense. The level of harassment from the security guards is frankly astonishing; they are asked for ID, followed as they take pictures and engage in a brief yet amusing debate with one guard over where the pavement ends and the Broadgate Estate begins.

The film’s director and producer and organiser of the London Street Photography Festival 2011, Hannah White, says:

‘The Stand Your Ground event and subsequent film successfully demonstrate that despite a lot of progress within the police force in the last few years the increasing privatisation of public land in the city means there is still an issue with the private security workforce confronting photographers without proper knowledge of the law.’

As part of the festival, a panel of activists, photographers and law enforcers held a discussion titled ‘Why does street photography make us paranoid?’ Why indeed? Project Griffin has one answer on its website:

Project Griffin was developed by the City of London Police and formally introduced in London in April 2004 as a joint venture between the City and Metropolitan police forces. Its remit was to advise and familiarise managers, security officers and employees of large public and private sector organisations across the capital on security, counter-terrorism and crime prevention issues.

Previously, under section 44 of the Terrorism Act, police officers could stop and search anyone without the need for suspicion in designated areas. The City of London is one of those areas. A document given to police in 2010 showed that taking photographs was considered 'suspicious behaviour'. This encouraged untrained and apparently ill-informed civilians to challenge them as a counter-terrorism measure. Thankfully, section 44 is no more, but it seems its memory lives on.

Just to provide some apparently much-needed clarification, here are ACPO’s own guidelines around photography:

The website describes Project Griffin as an ‘unqualified success’. If they define success as harassing photographers without any justification, failing to understand the law and acting in a manner which could be interpreted as intimidating (not to mention quite a lot of negative publicity) then their success has been resounding.

Not everyone agrees. While the police in this film didn’t find the photographers suspicious, ACPO’s message obviously hasn’t filtered through to rank and file – two tourists were recently stopped, searched and had their personal details recorded for photographing the not-very-secret MI6 building.

Fortunately for us, the photographers who contribute to the Londonist Flickr pool don’t appear to be deterred from their activities. Unless, of course, they were taking photos in a particularly covert manner.

Visit the London Street Photography's website for more details on events for the snap-happy. Oh, and do pop down to the City with your camera – we always appreciate pictures of architecture and local scenery.