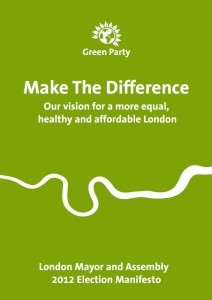 Jenny Jones made a bold pitch to the Green’s spring conference, telling her party that they could look towards a third place finish in the Mayoral elections – pushing the Lib Dems into fourth. Right now, the polls don’t bear that out at all, Monday’s YouGov tracker had them at 2%, on track for fifth place, behind UKIP… (Of course Jenny would very politely tell us – she's like that – that Caroline Lucas, who went on to win, had similar ratings in some polls before her election in Brighton).

This is odd – because the limited powers of the Mayoralty are skewed heavily toward areas that the Greens should be at home in: transport, planning, environment – this is their bread and oil based vegan spread.

In this bitter, unpleasant and largely policy free race, is the Green’s manifesto putting down a serious plan for the city? We read it, so you don’t have to, and here are the highlights:

Proposals to respond to wealth inequality open the manifesto, with a policy of a 10x multiple between the highest and lowest salaries in the Greater London Authority (GLA) structures, but it's not clear if this includes the big money jobs in the police, TfL and elsewhere outside City Hall proper. Business achieving this same multiple would be rewarded with a Fair Pay Mark, and preferential treatment for City Hall contracts.

Jenny throws her weight behind the Living Wage, and promises to lobby to raise the national minimum wage. There are commitments to assisting with childcare costs and assisting credit unions – both targeted to help the less well off.

The Greens would establish a youth Assembly, hold intergenerational summits, interfaith forums, fund the four Rape Crisis Centres and equip refuges to help those at risk of ‘honour killings’.

There would be land and funding for renewable energy jobs, and work with the City to facilitate long term infrastructure investment. Jenny would lobby for a land value windfall tax to fund investment projects.

The Greens would amend the London plan to ensure that every neighbourhood has ‘essential services’ such as chemists and newsagents (no pub?) within walking distance. There would be more lobbying to fight the spread of payday loan shops and bookies.

150,000 apprenticeships would be created, with lobbying to make these mandatory in certain jobs, plus continuing support for the campaign against tuition fees and the cuts to EMA. Academy schools controlled by the Mayor would be transferred to the Boroughs or parents.

The Greens aspire to a zero waste city – with 80% recycling and zero waste to landfill by 2030. They support weekly bin collections, but don’t back incineration.

A million homes would receive insulation, major developments that don’t maximise their environmental potential would be vetoed and coordination made for district heating piping to be installed along with mains water refurbishment work. Green space on housing estates would be protected from development, trees planted and vehicles and leaf-blowers banned from parks.

On the contentious fares issue, the Greens propose fare rises below inflation during the term, paid for by higher congestion charges on more polluting vehicles. A Heathrow congestion zone would be introduced, before a switch to pay as you drive tolling across all London.

The Greens back more, shorter, bus routes to increase reliability – but with hourly tickets allowing interchanges. A trial would see night buses stop on demand to reduce the risk of crime (slower night buses!). There’s an aim for 1/3 of the tube network to be step free by 2018 – we’re at 24% right now, so that’s a lot of work. The current business plan – which Boris cut back significantly (no specific funding for step free work 2013-16) – will only get us to 25% by 2018.

A Green mayor would lobby for control of suburban rail and see that four trains per hour, with the same running hours as the tube, become the minimum standard across London. Crossrail would be completed, with an additional station at Kensal Green (no word on how that is paid for). HS2 would be opposed ‘as currently designed’. There is a commitment to ‘plan for investment in new tramways’ – so we can expect a plan for how they might invest in a new light rail line, but no tram soon...

Car sharing to be supported, with a car share space within five minutes walk from every home by 2016.

Airport expansion is opposed in London and the Thames Estuary (no mention of Gatwick, Luton or Stansted) and London City would be closed to reduce air pollution and become a community enterprise zone.

Walking and cycling would be recognised with seats on the TfL Board (a great idea) and both would be prioritised above driving in the transport plan. 20mph would become the standard speed for streets where people shop, live or work. Dutch cycling design principles would be adopted on the Superhighways and London Cycle Network, with London’s most dangerous junctions rebuilt (no word on funding). Cycle hire would be expanded and a curious proposal for an east – west pedestrian zone of traffic free streets is included (but not what street that is on). Oxford Street would close to traffic every Sunday.

Parliament Square would be transformed into an iconic space in the first year, with one more world class public space created each year.

Lots of campaigning on health issues is promised (few Mayoral powers in this area) but drug users would be considered a health issue, not a crime one – how that is implemented is unclear. Jenny promises to tackle air pollution, replacing every conventional bus in London by 2016 with a low or zero emission vehicle, and offering electric taxis for rent.

A ‘no fast food’ zone would be established around schools to fight obesity, and food growing space for every new home would be included in the London Plan.

The Greens would establish a London Affordable Rent index, and only support ‘affordable homes’ that meet that price – with a target of 15,000 to be built. Further lobbying to the government on housing issues for private and social renters. A City Hall sponsored review website would be set up to name and shame bad landlords.

A broad ‘bobbies on the beat’ agenda here, with various ideas to get police away from their desks, funding for anti-gang work is promised, and lobbying to decriminalise less harmful drugs to break the grip of the dealers.

The troubled Territorial Support Group would be disbanded, with more public order Officers in local forces instead. The Met would not be allowed to 'kettle' protesters.

The Assembly and GLA

The Greens propose to lobby for a third GLA act to empower the Assembly (they know the frustration of its limitations), and they would ask for more tax raising powers – on environmental issues and income. They would seek the abolition of the City of London Corporation and democracy's introduction in the Executive Committees.

The Games Lanes would be 20mph, open to cyclists, and after the Games converted for permanent use as cycle lanes or expanded pavements, where possible. Unused corporate tickets would be given to young Londoners.

If, by a series of unfortunate events (perhaps, Boris gets knocked off his bike on the way to vote, Ken died of excitement on hearing the news and Paddick flipped out, shot the UKIP candidate, and fled abroad), we ended up with Jenny as Mayor, things would most likely be absolutely fine. The Manifesto goes out of its way to reference achievements of the Green members of the GLA (Jenny herself, and Darren Johnson). The party has been in the Assembly since day one, and if you ever check out what they are doing there it is clear that they take it very seriously – not all do.

This comes through in the manifesto: heavy with the experience that Jenny and Darren have of City Hall. They understand its powers and its limitations – but are very frustrated by them, and wouldn't plan on sticking within them. If we elect Mayor Jones, we'd be raising up a lobbyist in chief – expect to see her in Westminster as often as in Southwark, banging on doors and asking for more more power – and money, lots of money.

Money is a problem for the Greens, London wide road pricing would cost a great deal to implement and take years to plan, and though they've put together a document saying how they'd fund their pledges it's hard to see how this could deliver the seemingly unlimited pot of cash they need, within a four year term, and there is no reason to believe the Government would agree to the land price windfall tax. However, also evident throughout this document is the mark of pragmatism that you don't necessarily expect from what some perceive to be a 'single issue party' – that would be a very unfair description for this wide ranging document.