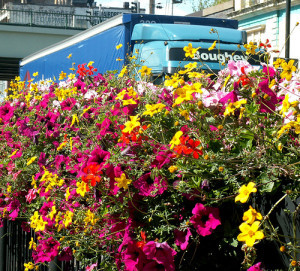 Motorists in London could face charges of around 40p per mile under a road pricing scheme being considered by the Green Party to reduce vehicle trips by 10%.

Green Party London Assembly Member Darren Johnson recently commissioned the report on road pricing over concerns about congestion levels, air pollution and health and economic efficiency. The scheme would cover the whole of the greater London area and replace the existing congestion charge.The report, drawn up by sustainable transport planning company Eco-Logica, claims that road pricing could raise a daily revenue total of £3.9m or annual revenue of £1.4bn.

Green Party mayoral candidate Jenny Jones outlined this week how road pricing plays a part in their plans to save Londoners £1500 over four years.

It's far from the first time that road pricing has been examined as a congestion-reducing measure; last year the Transport Committee revealed that government ruled it out. But could it work for London? One of the biggest issues any road pricing scheme faces is the type of vehicles it targets. TfL data showed that although there was a reduction in privately-owned cars following the introduction of the congestion charge, the numbers of commercial vehicles, taxis and motorbikes stayed around the same.

It's entirely likely that a car driver considering driving into central London would be deterred by having to fork out more cash, but less likely that a business owner who needs to make deliveries will be put off. Any charges would simply be passed on to customers as it's pretty hard to deliver several tons of concrete, office furniture or whatever to a site in the Strand by any other means. And according to the Green Party report, it's commercial vehicles which are the most polluting and congestion-making.

Not that there isn't a case for road pricing; it's basically relatively equitable in the sense that you pay for what you use. But implementing it at a regional level is fraught with difficulty. Motorists already pay very high taxes in the form of Vehicle Excise Duty (VED) and more importantly, duty on fuel which arguably is already a road pricing scheme — you pay tax for what you use. The only real difference is that the revenue goes to central rather than regional government. A successful road pricing scheme would be rolled out nationally and accompany significant reductions in fuel tax and VED.

The report does note that concerns over the social groups potentially impacted by road pricing, limitations of technology and fears that road pricing could be used to the exclusion of other alternative transport initiatives. It touches on the exemptions of certain vehicles such as motorbikes, taxis and the increase in alternatively-fuelled cars. It also doesn't really provide any viable alternative for commercial vehicles apart from higher charges at which point, like the congestion charge, it stops being a preventative of congestion and becomes another tax on driving.

Boris Johnson has repeatedly come under fire over the capital's air quality by everyone from the International Olympic Committee to campaign groups for cleaner air. Other cities, faced with the same problem, have opted for different approaches; Milan trialled a ban on all cars on Sundays. Beijing restricted driving through the city to cars with even or odd number plates on alternating days which was also tried in Athens. TfL, however, told the Guardian that there are 'no plans' to introduce a London-wide road pricing scheme:

"The proposal has been included in the mayor's transport strategy so that if the raft of other measures to address congestion, including a huge investment in London's transport network, the lane rental scheme and other measures to increase transport capacity across the capital, are unsuccessful then a larger-scale system of road-user charging could at that time be considered. However, this would be very much the last resort, and very much in the long term."