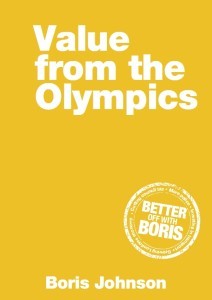 Boris Johnson has officially launched his re-election campaign and manifesto. Unlike the other parties, the Tory manifesto comes in five parts (not all of which are, at timing of writing, available from the front end of his website). If you want to read them in full, check out what he has to say on transport, the Olympics, crime, the economy and older Londoners.

Large swathes of this manifesto are taken up with Boris's record, repetition of policies and an amount of Livingstone-bashing. (For example, of the six paragraphs about making crime stats more transparent, only one actually deals with plans to improve transparency.) We've summarised the basic thrust and picked out the bits that look exciting and new but if you don't have time even for that, our summary of the summary is: it's dependable. It's solid. It's a continuation of current policies which is understandable from an incumbent, but when that incumbent is someone as flamboyant as Boris Johnson you expect a bit more imagination and flair. We might even go so far as to say it's a bit disappointing.

Boris plans to boost Special Constable numbers, Safer Neighbourhood Teams and create Safer Neighbourhood Boards so communities and victims can have a say in how they're policed. He's also bigging up the 1,000 extra police on the streets (we looked in closer detail at that claim last week) and says he'll make sure they'll spend more time on the beat. "A force that looks like London" is a phrase you'll find repeated throughout the party manifestos, promising to increase the diversity of the Metropolitan Police, something we welcome from them all. Gangs and weapon dogs also get specific mentions.

He wants to use Automatic Number Plate Recognition across London to trace criminals, use "Community Payback" to make offenders improve neighbourhoods (both Labour and Lib Dems plan similar schemes), create a crime reporting app and plans to set up a Sentencing Unit for London that would influence sentencing and create more imaginative solutions, like the Compulsory Sobriety scheme.

Boris plans to extend Project Daedalus and the mentoring scheme, neither of which have been particularly successful so far. He also guarantees funding for London's four rape crisis centres for the duration of his term.

Boris says he'll create 200,000 jobs through the Crossrail and tube upgrades, Olympic legacy plans and house building programmes. He has £6m for 4,000 apprenticeships in London's small and medium sized businesses (SMEs), will extend travel discounts to apprentices over 18 and offer 100 paid internships within the Greater London Authority. There'll be a new £35m fund to provide loans to SMEs.

One of the main points in his 9 Point Plan is that Boris is best placed to negotiate with government for funding (though you'd hope the government would be big enough to talk to whoever Londoners elect) and wants London to keep more of its taxes.

A lot of things come under the economy manifesto: an accreditation standard for landlords, plans to build 55,000 affordable homes by 2015 (though the definition of 'affordable' is changing). He wants to encourage Free Schools and identify unused GLA buildings that Free Schools could use. RE:NEW will be expanded to 20,000 more homes, there'll be an extra 1,300 electric car charging points by 2013 and the GLA will have 1,000 electric cars in its fleet.

Boris presents the Olympics as a huge opportunity to grow the economy. This summer should work as a showcase for boosting tourism and promoting investment into London. There's also mention of looking at the possibility of a new science institute in the Olympic Park.

He promises the Olympic legacy won't add an extra penny to our council tax. A new Mayoral Development Corporation will be responsible for managing the legacy, including creating 10,000 new jobs (seem to be mainly in construction) and 11,000 homes at the Olympic Park. There'll be a £30m grassroots sporting programme that will benefit 250,000 Londoners, including grants to 300 sports clubs.

This is pretty much an amalgam of the other manifestos, picking out protecting and expanding the Freedom Pass, improving transport accessibility, a 'know your rights' campaign and talking about how Jubilee street parties can help elderly people feel less isolated. Because pensioners love nothing better than a knees up for our dear old Queen.

We had a look at Boris's transport manifesto a few weeks ago.

Take a look at all Londonist's election coverage.