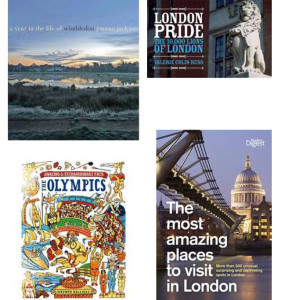 Four recent or upcoming titles that might be of interest to Londoners.

London Pride: The 10,000 Lions Of London, By Valerie Colin-Russ

People have strange hobbies. We once received an email from a man whose ambition was to visit every Starbucks in the world. Another chap would only buy food that he'd seen listed on discarded shopping lists. Valerie Colin-Russ has a somewhat nobler obsession. She's spent the past 25 years tracking down every lion statue or sculpture in London. The final pride, as the appendix and title of the book make clear, reaches 10,000. "The lions must be three-dimensional (or at least in relief on a building) — I do not count merely painted lions..." (readers of a certain age and humour might be reminded of Simon Quinlank). Ours is not to reason why, but to marvel at this fine compendium of leonine sculpture, with its plentiful photographs and strangely absorbing text. Learn to name the different heraldic stances of the beast; spot London's many Alfred Stevens lions; and discover London's saddest lion in Hammersmith.

Amazing And Extraordinary Facts: The Olympics, By Stephen Halliday

On the face of it, this seems like just another themed collection of trivia, the likes of which, if stacked on top of one another, could reach to the moon and back 17 times. But Stephen Halliday is a pass master at assembling golden nuggets of fact. His previous books include similar volumes on the London Underground, Great Britain, and London itself. This Olympic effort is true to form with plenty of eyebrow-raisers (the City of London police are the reigning Olympic champions at tug-of-war!). It's also amusingly written, with rays of the author's character shining through all those dates, weights and records. First and foremost, though, it's a fun way to brush up on your Olympic history ahead of this summer's Games.

The Most Amazing Places To Visit In London, By Reader's Digest

Like the preceding book, which shares the 'amazing' adjective, this new guide from Reader's Digest is more than it first appears. Covering over 400 attractions across more than 200 full-colour pages, it's a bargain at the RRP of £15. The content is markedly better than most other mainstream guides to the capital. Buckingham Palace is given equal space with Stave Hill in Rotherhithe. Eastbury Manor in Barking gets more words than the Houses of Parliament. It's a guide book that will appeal to inquisitive Londoners as much as — if not more than — the first-time tourist. And if you like what you see, there's a growing series of similar books from RD covering the wider country.

A Year In The Life of Wimbledon, By Joanna Jackson

There's more to Wimbledon than tennis and Wombles, is the thesis of this new picture book from the publishers' ongoing "A Year In The Life Of..." series. The history, the wildlife, the peculiar story of the local football clubs, the windmill, the theatre, and much more besides. Locals will enjoy the many fine photos of their often beautiful patch, while outsiders will be tempted into a visit. This is very much a celebration of traditional English Wimbledon (particularly the more photogenic village end), rather than a comprehensive account of the area.