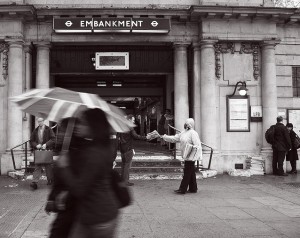 The Bakerloo Line is suspended between Piccadilly Circus and Elephant and Castle due to what Transport for London is calling "an obstruction in tunnel at Embankment". Confusion currently reigns over whether it's a partial tunnel collapse or a whether a train struck a more mysterious object. The BBC's Tom Edwards has been told by London Underground engineers that's it's not a tunnel collapse as there's no flooding.

We'll keep an eye on what's happening and update this post when we get more information. LBC reports that although ambulances were called, they weren't needed, so it looks like nobody was hurt.

Update 11am: the RMT have been saying so far the tunnel collapsed, but have now altered their stance. It now looks like all this bloody rain caused a bulge in the wall and this is what the train hit.

Photo by Jon Smalldon from the Londonist Flickr pool.