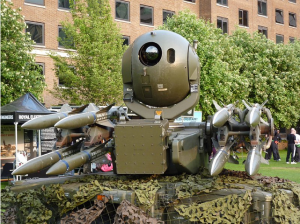 The Ministry of Defence could install ground-to-air missile launchers on Blackheath and the appropriately named Shooters Hill, reports the BBC. The battery would be designed to ward off aerial terror attacks during the Olympic Games.

A final decision on the location of the defences, and whether to deploy them at all, has yet to be made. However, extensive planning and evaluation works have already taken place in the area.

Local MPs Clive Efford (Eltham and Plumstead) and Heidi Alexander (Lewisham East) are unhappy with the lack of consultation. Efford has written to Defence Secretary Philip 'Ammo' Hammond to lodge his displeasure.

An anti-aircraft missile launcher on Blackheath would have some local resonance, given how close the heath is to the Royal Arsenal at Woolwich, a traditional home of the nation's firepower. But the installation of explosive weapons on the heath is likely to vex local residents, who've recently fought loud campaigns against horse events in Greenwich Park and a festival on the heath itself. The missiles would also be a curious neighbour for the giant screen Lewisham plans to erect on the heath during the Olympics.