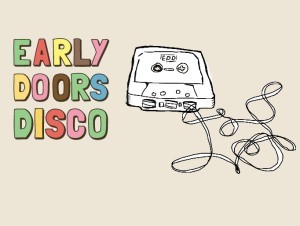 Wednesday. It is usually the day when you really feel the working week starting to drag on. You soldier on, surviving the Monday and Tuesday slog with medal-worthy aplomb and then Wednesday morning comes to remind you that there are, in fact, three more working days before you can down tools.

But let's not forget that, by Wednesday afternoon, we're entering 'hump-day' territory and it all gets better from that point onwards. Before you know it, it's the weekend!

As a sweeping generalisation, we'd say most people tend to stay in of a Wednesday evening. The majority of non-student club nights are usually geared towards the weekend crowds and, apart from a drink down your local, the options for an enjoyable, if somewhat sensible, way to pass a Wednesday night after work are not vast. You might not necessarily want to go straight home from the office and, at the same time, you don't want to completely annihilate the chances of waking up on time the following morning. Right?

Well, Early Doors Disco might just be the answer. Opening its (early) doors this Wednesday evening, a stone's throw from King's Cross at Drink, Shop & Dance on Caledonian Road, Early Doors Disco is a 7pm-start disco night facilitating a mid-week mingle for those who want to, as the organisers put it, "have a few drinks, get their dance on and still be able to get the last train home".

Cinderellas and Cinderellos are catered for, with an 11.30pm finish.

For an idea of the kind of music you might expect to hear at EDD, you can check out the DJs' latest Top Tens and also submit song requests in advance at the same section on the EDD website. Generally, the idea is that all songs played after 7.30pm must be danceable, with an eclectic mix of genres including pop, electro, indie and soul, to name but a few.

Priced at a bargainous £0 (yes, you read correctly - that's zero pounds of the realm!), you've nothing to lose, really.

Early Doors Disco takes place on the first Wednesday of every month. For updates and more details head over to EDD's Twitter page.