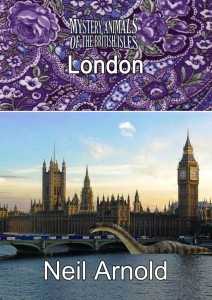 London is teeming with preternatural animals, from exotic big cats to winged abominations straight out of folklore. So posits Neil Arnold in a book that can only be described as eccentric.

'Mystery Animals of the British Isles: London' collects together hundreds of tales of freakish fauna — from days of yore to the current time. There's plenty of fascinating stuff in here: the Sydenham leopard, covert menageries, giant rats, even a capybara in Barnet. The book also chronicles sightings of creatures that could generously be described as 'unlikely', such as the Brentford Griffin, the phantom ape of Hampstead and a monstrous giant bird at Lincoln's Inn. Arnold maintains a sceptical though enquiring mind throughout.

At around 400 pages, heavily reliant on press cuttings, this is certainly a sturdy compendium and useful sourcebook for anyone interested in this side of London. Some readers, however, will squirm like a spectral snake at the loose editorial control. There are too many typos. Blurry images of stuffed animals — dozens of them — add nothing. And the placement of Joseph Merrick in a section headed 'Curious Creatures and Beasts with Human Features!' feels uncomfortable.

That said, the lack of a staying hand also lends the book a certain charm. The Paisley-and-plesiosaur front cover must be unique in the annals of publishing. So too the hilarious cartoon images of the author that appear throughout the text. Dressed in his dandy finest, Arnold cavorts with 60's sirens and supernatural abominations in equal measure.

A supremely odd book, then, but one we're glad to see published.

Mystery Animals of the British Isles: London is out now from CFZ Press. Buy here.