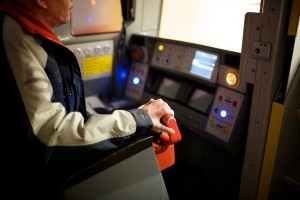 Boris Johnson has declared that he can deliver a tube network with 'driverless' trains to reduce the risk of strikes.

In an interview with the Evening Standard, the Mayor says Automatic Train Operation (ATO) – being introduced on the Northern, Circle, Metropolitan and Hammersmith and City lines – will remove "pointless" drivers' strikes by eliminating drivers. Sadly, what Boris isn't mentioning is that drivers' strikes would probably just be replaced by train captains' strikes.

The reason we put quotation marks round 'driverless' trains is because while they can operate automatically, they can't operate unstaffed. The DLR, Central, Victoria and Jubilee lines are automated but still need a member of staff to open and close the doors, drive the train if automation fails and help passengers in an emergency. The new ATO trains will work in the same way.

This is the third time in the last couple of years the notion of 'driverless' trains has cropped up via City Hall; and this is the third time we, and others including Christian Wolmar, have pointed out that it's not what Boris thinks it is. His advisers clearly aren't reading the right websites.

Maybe the idea of 'driverless' trains is one to add to our list of transport election promises you shouldn't trust?