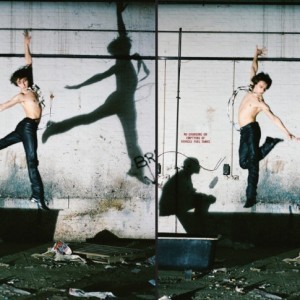 Celebrating the beauty and expressiveness of the male form through dance sounds like a delightfully un-British concept. Being open about emotions and physical expressiveness is not something our men are famous for (the French usually take on this role). So, Men in Motion at Sadlers Wells is a new, refreshing concept.

For this show though, the story goes deeper. Originally, men were the stars of ballet – the 18th century stage was filled to bursting with male ballet stars before they were reduced to ‘porteurs’ (men who just carry the female dancers) in Paris by the advent of the ballerina in 1832. This show sets out to remind us, as show’s producer and dancer Ivan Putrov says in his opening address, of ‘the possibilities for the male dancer to take power of the stage.’

In practice, this is a powerful palette of male solos, some rare and groundbreaking, from the last 100 years in ballet. There are pieces by Russian and British choreographers with different visions of masculinity. In the opening solo, La Spectre de la Rose the pink clad and muscle bound dancer Igor Klob, steals in on the maiden’s dream like a mischievous Puck wreaking havoc with his hallucinatory powers. Kolb imitates the pirouettes and amazing jetés and spins of ballerinas, and the maiden is left, literally breathless by the apparition. Then, in Dance of the Blessed Spirits by Brit legend (founder choreographer of the Royal Ballet) Sir Frederick Ashton, we have a heroic, more recognisably masculine dance. Not a vehicle for a virtuoso, more an understated celebration of dignity, poise and incredibly deft and intricate footwork, Putrov dances this faultlessly.

Of course, the show was heralded by the most amazing publicity. Sergei Polunin, dancer of Russian piece, Narcisse, sensationally quit the Royal Ballet just a few days ago. Like with any self destructive, prodigiously talented youngster (Polunin tweets about his love of beer, tattoos and drugs), this adds extra astonishment factor to the performance. Polunin is physically perfect –- no sign of the alleged tiger claw tattoos –- his perfectly etched muscles rise above flesh coloured tights (at first the illusion is that he’s naked) used to harness energy for his many leaps and bounds. Occasional quirky male movements, such as punches and jerks, encapsulate the idea of the show, to celebrate how men move and express themselves. Slightly poignantly, a photo Polunin posted on Twitter shows him collapsed on a sofa, beer can in hand. In sight still are beautifully stretched out dancer feet – his talent and beauty carried in a fragile soul.

Standout performance of the night however goes to Argentinan dancer, Daniel Proietto, in Russell Maliphant’s, Afterlight (Part One) — which we've witnessed and gushed over before. Power and cool exude from just an inch of movement as Proietto rotates on the spot like some incredible version of a musical box creature. Fluidity doesn’t do justice to this man’s movements, as the dance progresses to about four inches from the floor, with Proietto performing the dancer-conjuror’s trick of making the floor seem as soft as a rippling river. All to the accompaniment of what could have been Chopin’s raindrops piano solo, which enhances the elemental theme of the piece – we are watching a man being buffeted by elements, his body bending and dodging an invisible malevolent force.

Men in Motion injects some much needed anarchy into the ballet scene, largely dominated by popular crowd pullers (there were four Nutcrackers this Christmas) that carry the traditional concept of male ballet stars supporting the female, literally and metaphorically. True though, much of the passion and romance of ballet (and our enjoyment) centres on tragedy and love stories. So taking out the female from the equation does inhibit this format as being a staple for future story based shows. But as a one off platform for singing loud and proud about London’s amazing male ballet stars, this is a fabulous treat.

If you can’t get a ticket for the last two shows (MIM ends Sunday 29 Jan), watch out for more men dancing action at the Wells with Balletboyz on 3-4 March.

Men in Motion is at Sadler's Wells tonight 7.30pm and tomorrow afternoon at 4pm. Tickets from £12.