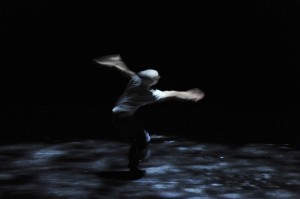 Before waxing lyrical about the brilliance of Russell Maliphant’s Afterlight it must be confessed that the fabulous solo is actually just a guy (Daniel Proietto) turning in a light — nothing particularly radical about that!  But in the familiar tale of simplicity ruling the day, Afterlight goes one step further and conquers it.

Maliphant and lighting designer Michael Hulls are a tour de force in performance creation.  Neither would be successful without the other.  Hull’s lighting cuts the movement in unique ways, creating cinematic imagery rarely seen on stage.  Maliphant’s choreography is so in tune with the lighting that a true sense of unity is always present, neither came first; they emerged together.

This performance of Afterlight is an extended version of the original solo performed in 2009.  The inclusion of two women, who join Proietto on stage after his glorious solo, unfortunately provide an unnecessary second scene before we get to glimpse the man doing what he does best to end the piece — turning.  The extended version of Afterlight is much like your favourite television series being made into a film (think Sex and the City) or a show that hangs on for a few seasons too long (Friends).  It doesn’t mean we won’t watch it, but we’ll just wish we’d been allowed to see the original first.

If you missed last night’s performance, get a ticket for tonight if you can. Afterlight is one of those pieces best seen from above, so a £10 ticket is probably the best seat in the house — bargain!