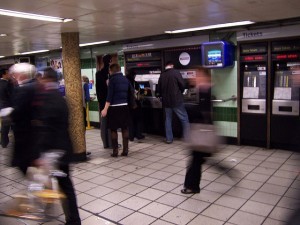 The TfL press release trumpets that the average fare increase is 5.6%, but from a quick scan it looks like most of the fares we use most often are increasing by more than that. We're also not sure how much the Mayor 'secured' £136m out of Osborne, since he gave cash out to hold down rail fares across the country as well.

Some cash tube fares are also not going up as much as planned: if you live in zones 4-6 and want to travel into zone 1, it will now cost you 30p per journey extra, not 40p (a 6% rise). Those of us living in zones 1-3, cash fares stay at 30p extra per journey which, although the same in actual coins, works out to a 7.5% rise. One day travelcards and PAYG caps are rising by 20p less (peak) / 10p less (off peak) and seven day travelcards are being held down to roughly a 6% rise, as opposed to 8%.

However, there's no change to previously announced PAYG fares, which means if you're working in zone 1 and living in zone 2, that's an 8% rise for you. Most child PAYG fares are also still going up by well over the government cap.

Boris Johnson had to contend with Ken supporters protesting about fare increases as he made the announcement earlier, insisting that

Labour cuts would mean reductions in services. They would jeopardise bus routes and the 24-hour freedom passes

Er, would someone like to tell the Mayor that TfL doesn't fund freedom passes, councils do?

You can see how fares have increased since 2000 with our table.

Photo by Andy Wilkes from the Londonist Flickr pool