Transport Fare Rises Set To Be Held Down 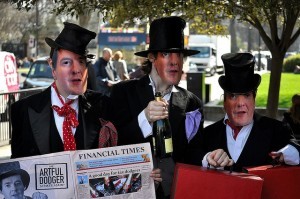 The eye watering fare rises due to take effect at the start of next year won't be as bad as announced, if the rumours ahead of George Osborne's autumn statement on the nation's economy are true. (And they probably are. Treasury officials are doubtless briefing like crazed folk.)

The Chancellor will apparently cap regulated fare rises at 1% above inflation (currently running at 5%) instead of 3% above inflation. He's got £300m in his back pocket to ease the pain of public transport users, £130m of which will go to TfL - who have previously announced a rise of inflation +2% for some fares and inflation +3% for travelcards. Revised prices haven't been announced yet, but Andrew Gilligan has worked out that a zone 1-6 travelcard will cost around £120 a year more rather than £160. So, depending on your point of view, it's either still a £120 rise or £40 saved.

However, Gilligan also points out that TfL's massive investment commitments were based on fares rising by RPI+2% each year until 2015. This cash from the government will fill a temporary hole, but TfL are basing their funding requirements on fares being at a certain level after Osborne's money runs out. Should we expect a hike in future years to bring fares up to where TfL expected them to be?