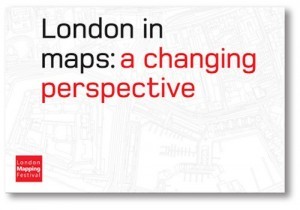 Aren't there already enough books about London maps? Apparently not. Following the equally excellent London: A Life in Maps (2006), and Mapping London (2007), we now have London in Maps, A Changing Perspective.

The new book comes from the London Mapping Festival (full disclosure: Londonist is an official supporter, and one of our maps is included within). Its authors, professional cartographers from the Geoinformation Group, have found a different angle in compiling their book. As well as setting out some of the best maps from London's history, they also offer insights into the map-maker's art and science. We find chapters on the importance of aerial photography, modern technologies such as LiDAR and 3-D modelling, and so-called geographic information systems. It's a book that explains the tools of the trade as much as their output.

It's also well-endowed with unusual and intriguing maps you might not have seen before: a telecoms cluster map, London's vegetation map, and an aerodrome map from a time when cross-city flights seemed a possibility. The complexity of seemingly prosaic maps is also explained, such as the plan of the Canary Wharf Estate, which undergoes around 180 changes every year. And plenty of old favourites – Stephen Walter's The Island, the Rocque map of London, Wenceslaus Hollar's Great Fire map – are all present and correct.

At £30, it might be beyond the budget of the casual reader, but it's a highly recommended addition to the bookshelf of any London mapophile...and we can tell from our pageviews that there are plenty of you out there.

London in Maps, A Changing Perspective is out now from the London Mapping Festival. 200 pages, hardcover, full colour. Order today (15 December) to get delivery before Christmas.