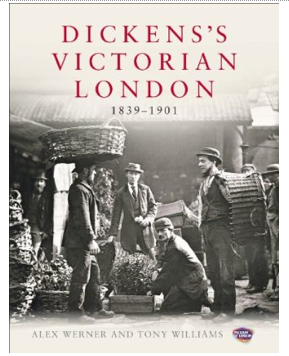 A thick pea soup of a book that blends two of the Victorian period's finest ingredients: Charles Dickens and the dawn of photography.

This new tome from the Museum of London accompanies their current exhibition to mark 200 years since Charles Dickens's birth. Like that exhibition, it concerns itself more with the city Dickens loved than the great man himself. Indeed, the dates in the title appear to have wandered over from a volume about his queen. Victoria's Dickensian London would work just as well.

Hundreds of images, mostly drawn from the Museum's archives, are corseted between the covers. Some, such as the shots of the Oxford Arms coaching inn or the wretched childminder on the steps of St Giles workhouse, will be familiar, not least to those who own English Heritage's recent Lost London 1870-1945. The formats and, to some extent, content are similar.

But Dickens's Victorian London repeatedly pulls a humdinger of a rabbit from its stovepipe hat. One remarkable Fox Talbot shot from 1841 is thought to be the earliest existing photograph of the river Thames. It presents an alien view of Westminster, with no Houses of Parliament, no Hungerford Bridge, no 'Big Ben', but the medieval Abbey and Westminster Hall dominating the skyline. Another good section shows the scars of progress as the early cut-and-cover Underground routes are carved out of Paddington, Blackfriars and Victoria.

This is a begrimed, benighted city, where children were as likely to die as survive. Of the many photos showing the river, not a single duck, coot, goose or cormorant can be seen. The water was simply too filthy. Industry is everywhere, from the teeming docks to the ramshackle tanneries of Bermondsey. Recreation in almost absent. This is more the London of Oliver Twist than of the Pickwick Club.

Throughout, museum curator Alex Werner and Dickens expert Tony Williams offer insightful commentary and captions, many connecting the images to Dickens's life or characters. Extracts from the novels are called forth to embellish each section: Dombey and Son accompany the railway chapter, while a quotation from Great Expectations introduces the river photos.

In summary, there's no great thesis at work, or deep insight that was previously lacking, yet this volume succeeds in pulling together some of the most absorbing photographs from the era.

Dickens's Victorian London 1839-1901 by Alex Werner and Tony Williams is available now from the Museum of London, and can be bought elsewhere from 5 January. Order here.