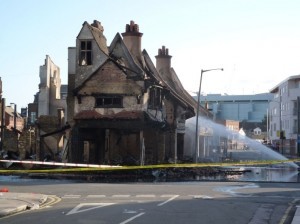 A project by the London School of Economics and the Guardian newspaper to look at all aspects of this summer's riots is publishing its findings in a series of reports this week.

A team of academics, researchers and journalists interviewed people who took part and have collected 1.3m of their words. Add to this an analysis of 2.5m tweets and they're hailing an in-depth look into the heart of the issues and communities affected.

We've already heard some of the preliminary findings (such as: most of London's rioters came from the poorest areas, and that many had special educational needs); now 85% of those involved say they rank tensions with the police as important in their reasons for taking to the streets. While some sceptical voices have pointed out that when 75% had previous convictions, it's not surprising they're not happy with the cops; but the Met themselves have admitted they may have failed to spot tension building up.

You can find full coverage of the analysis, interviews and methodology over at the Guardian.